Dor has come to detox.

He’s a pill popper and an alcoholic who looks 29 going on 40 and who sneaks out of the monastery to down five beers and watch a Netherlands game before returning to the temple on the back of a truck. Ashamed. Sauced. And reeking of Burger King.

Harry’s here nursing a loser complex.  Weighing in as a tubby, four-eyed Canadian who’s disturbingly tight fisted with his bug spray, Harry drunkenly fell off his motorcycle the night before and has checked into the monastery to think about things. And not end up dead somewhere.

Pilar and Sara are sisters.  They’re playing Mother Theresa all over Asia, volunteering to work in halfway houses for junkies and the disabled with the money Pilar made from cutting marijuana at weed camp in California in-between waiting for a settlement from the big Colombian construction company that didn’t fill the hole Sara fell into  which left her paralyzed for three years before an assortment of shamans, miracles and psychedelic plant life reduced her paralysis to a limp.

Julie is from France but Algerian by heritage. She’s my first friend here and one night we get so giddy on starvation and chanting we giggle right through the Buddhist Reflection of Loving Kindness and feel so ashamed we really put our backs into chopping up the rotten fruit the monks use as fish food during chores the next day.

Three days before I know any of these people, I’m standing on the side of the road 2kms from the monastery after a death trap of a minibus has dropped me off in the mad middle of nowhere and the bus driver has gestured in the general direction of a winding road that disappears into darkness growing darker before speeding off into the night in a fit of carbon monoxide. 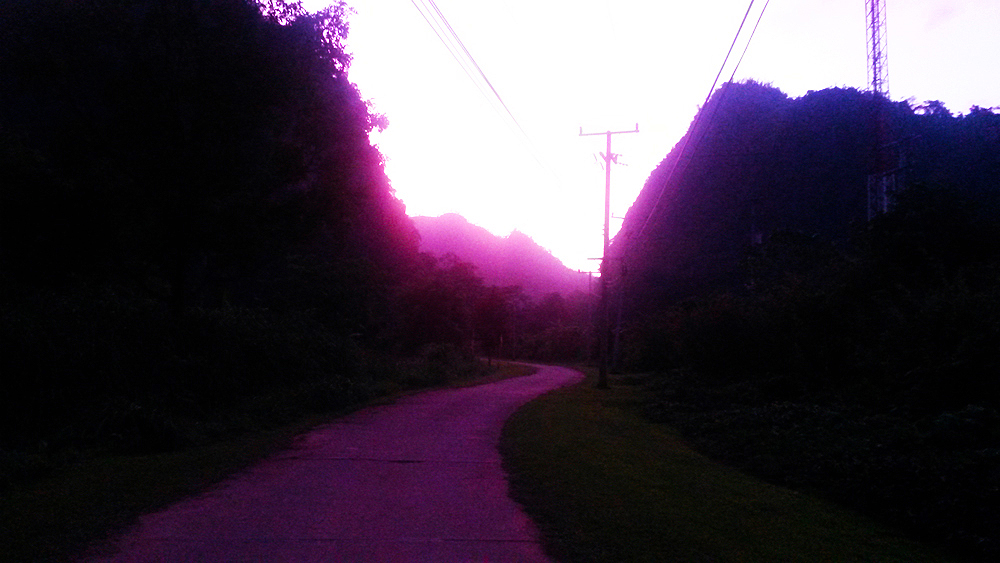 When the mini bus lights are well and truly gone and standing right where I am seems like more of a threat to continued existence than beginning the trek towards the monastery, I clutch my overnight bag to my chest and take my first step down the road.

According to my sister I have to keep walking for about 2 kilometers before I hit a gate then a gazebo and then I should walk in the direction of the chanting.

As I replay her instructions in my head, I realize that I have well and truly lost my mind.

I’m petrified of animals and I’m afraid of the dark but, for some reason, I’m standing in the middle of forest Thailand in the pitch black hearing the sounds of Big Foot, El Chupacabra and a whole menagerie of mythical creatures moving in the river rushing by and in the thick tangle of trees made monstrous by the lack of light.

I walk and I cry and I walk some more because the whole thing has started to feel like a bad dream and I get it into my head that the only way out is through.

Through the black, through my fears, through the growing idea that something is going to jump out of the trees and maul me beyond recognition.

After eternity set to the slap of my flip flops, I catch sight of the gazebo. A large banner welcomes me to the monastery and everything is silent until it isn’t.

Until a chorus of voices float towards me on the breeze in a chant that is no choir of angels but which is the most beautiful sound I have ever heard simply by virtue of it being human.

And then they come.

A bright white line of people walking quietly over a bridge like a procession of glowing ghosts headed towards an assortment of wooden dwellings I can just see as large brown spots in the dark.

After my first night there, I come to know that I arrived at the end of evening chant.

We do this every day.

The monks are on some kind of enlightening loop and every single day is the same as the next and for the first two days, I don’t communicate with anyone besides some frantic text messages sent to my friend James whose reassurance involves cautioning me against “period-sniffing bears” when I tell him I’ve started menstruating in the freakin forest.

This after being assigned a kuti with a toilet that is nothing more than a hole in the ground for pee, poop and dignity.  Add this to the fact that we have to swop our clothes for white pants and a shirt and it’s all set to be a bad time far beyond the gecko that falls on my head during evening chant, the reality that we only get two meals of rice, fruit and vegetable curry a day and we aren’t allowed to eat after 12pm but we do enjoy the irony of “mindfully” cutting up food for the fish.

While we’re mindfully starving to death.

Incredibly, it gets better.

Yes, the place is filled with drug addicts, alcoholics and broke backpackers who can’t afford rent anywhere else and so swop the endless demand of mediation for two hot meals a day while they wait for a deposit from mommy but there are also a whole lot of people like me.

People whose heads are never quiet.

Who’ve made a career of over-thinking and who feel enslaved by a world that demands that you think, analyze, update, photograph and compose something witty and envy- inducing every minute of your mostly miserable life in a world bent on blowing itself up.

The monks call the antidote to all this Vipassanā. It means ‘to see things as they really are’ and they teach us that we can do this through meditation.

Strangely and though many of us are beginners, the monks seem distant and don’t say much.

They seem to exist on another frequency and they tell us to breathe in and out while being mindful and aware of our thoughts until we reach a state of “knowing” which offers respite from the endless inner stream of recollection, prediction, thinking and agonizing which they say is the root of all suffering.

They tell us to be still.

To watch ourselves from inside ourselves and they tell us to practice peace, loving kindness and wisdom.

It’s as simple as that.

Every day is as simple as being aware and not giving into negative thoughts played on loop on that saboteur screen in our skulls. Rather observe our thoughts as they arise and dispel pessimistic and destructive patterns to reach a positive and peaceful mind state.

We do this quietly walking around the immaculate grounds, over bridges and up mountains. We meditate sitting still on mats as our legs cramp with inactivity and finally we do this lying down, stretched out but not asleep.

This is our life and pretty soon it becomes hard to imagine anything else. Beyond the monastery, beyond the pristine gardens and, one day, as we’re walking, I catch sight of myself from above my body.

Mindfully putting one foot in front of other in a long line of people in white clothes following the monks in bright saffron.

From somewhere else I watch myself doing this over and over and over again and suddenly, I laugh out loud because  I’m sure I’ve finally cracked wide open and that I’m not in a monastery … but a mental hospital.

Like anyone who snaps under the worry, the weight and the war of this world, I have come to heal my mind.

I’ve come to learn how to use a tool just like Dor and Harry who don’t want to use booze and drugs to silence their demons but who’d rather find the answer to it all inside themselves.

Because they have a feeling it’s in there somewhere.

Because the only antidote to ourselves is ourselves.

Now I’m not saying I’m a vegetarian and that mosquito genocide isn’t my life’s work, with or without the prospect of reincarnation, I’m just saying I know to be mindful.

I know to watch my thoughts and my negative thought patterns and I know that we all need a little break from ourselves every now and then.

In monasteries, in Thailand…or maybe just in our own mind. 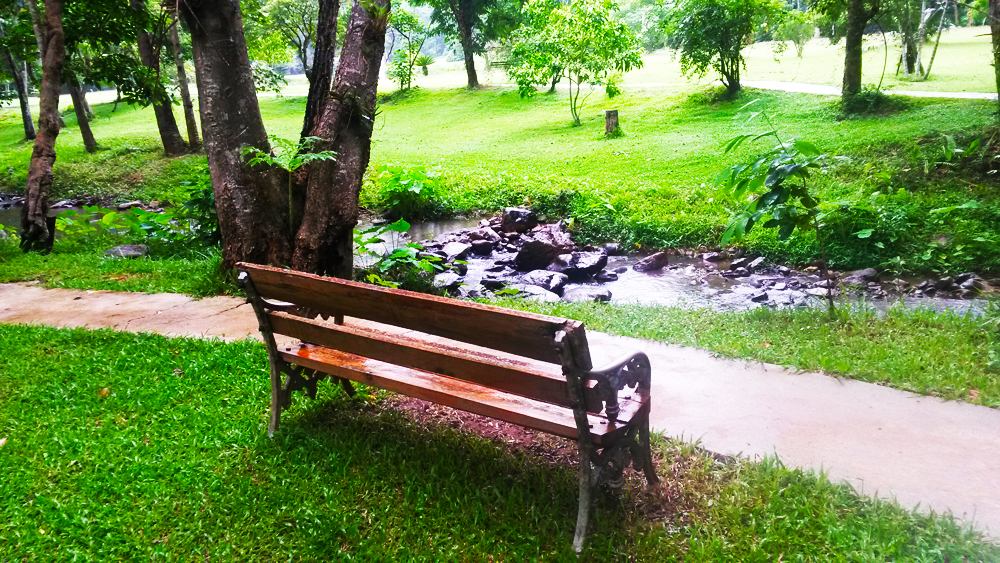 The Monk and the Military Man