At first, second and hundredth bite, Indonesia is everything you could possibly want out of life. 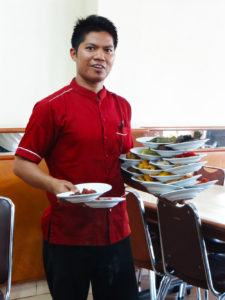 Prawns are served in soups, grilled, tempura and even in crackers, fish is fresh and cooked in  spices you can’t name but which suddenly need to become an integral part of your dismal diet and fruits like pineapple, watermelon and coconut are about in abundance and available after every meal to cleanse the palette and preserve the waistline.

Until your stomach remembers that you’re a red blooded Windhoeker and your craving for red meat blots out such spectacular sights as Uluwatu temple and pink beach and you find yourself fantasizing about taking a bite out of a passing cow like so much Komodo dragon.

This is the severe state of things before I discover rendang.

A spicy beef dish that saves my life and my standing with Hindus who can just about tolerate people who eat meat but will surely shun the calibre of carnivore who takes a delirious bite out of free standing sacred cow.

Lucky for me, after five days of delicious seafood, soups and more rice than I knew we produced on the planet, we head to Restoran Sederhana in Bali.

A Padang style establishment which means the meal is pay–for-what-you-eat from a selection of dishes cooked freshly once a day and boasting a rich taste of coconut milk and otherworldly spices.

Named for the capital city of Indonesia’s West Sumatra, Masakan Padang (Padang cuisine) is a popular style of eating that begins with washing one hands in a bowl of water with a slice of lime before using your paws to eat everything from curried chicken, fish and squid to fresh cassava, chili eggplant and fried beef lung to  pepes ikan  replete with Indonesia’s every present bowls of spicy sambal.

Though one can choose from the dishes on display in a Padang restaurant’s window, dine-in style restaurants see waiters stacking plates down the length of their arms and hands before deftly delivering them to the table.

With plates stacked and overlapping, the eating process is pretty much a case of gastronomic Jenga that adds yells, spills and laughter to the cuisine as a dash of social spice that only enhances the inimitable flavour.

Back to the rendang and I am pretty much ignoring everything else while savouring the taste of the succulent beef that has been allowed to simmer in coconut milk for hours coated in paste of  lemongrass and ginger, chili and spices which all evaporates to create a sauceless dish none too short on tenderness and wow.

Originally used as a preservation method before refrigeration, rendang was a way to cook a cow

that would allow the meat to be edible for weeks in the relentless Indonesian heat.

Except for the fact that it is a meat preservation method that has survived the advent of fridges and remains famed as a great way to eat  beef.

Certainly soothing for this whining Windhoeker, when it comes to Indonesian cuisine, rendang is a firm favourite made all the more moreish because beneath the cooking in coconut and singular spicing… it tastes just like home.

Martha Mukaiwa spent 9 days in Indonesia as a guest of the Indonesian Ministry of Tourism. For more photos and comments about her trip, click through to her Instagram or search the Instagram hashtag #indomarth