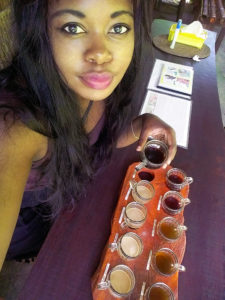 There’s a special kind of brainwashing that goes on in Indonesia.

A cunning assault on the psyche waged from magazines, billboards and the 123 678 prompts you receive from pictured popstars and people of note grinning over a cup of kopi luwak.

As a person who relies on caffeine as central to my will to live, I can’t resist what is clearly a brand of wildly popular Indonesian coffee.

In fact, to be as exceedingly over the top as I tend to be, I decide to try my kopi luwak at a whole coffee plantation amidst a tasting that includes coffee infused with coconut, cinnamon, and chocolate.

The tasting is free and part of an eight-hour tour of Bali I take with a taxi driver I meet on the street.

In my mind, the Six-Cup Coffee Extravaganza may very well fuel the extra burst of Hulk-like strength I’ll need if Yadi, my taxi driver, casually turns into Hannibal Lecter amidst a quiet drive fringed with Ubud forest…you know, as strangers whose cars you get into on the street sometimes do.

It’s a clever plan and I grin to myself as Yadi ushers me out of the air-conditioning about twenty minutes from Ubud and into the hands of a man named Putu who shows me around a plantation called ABCD Coffee, happily pointing out bright green Arabica, amidst plants that produce the superfoods I can’t afford in the supermarket’s bougie health section.

Recently arrived from drought, I walk around in awe. 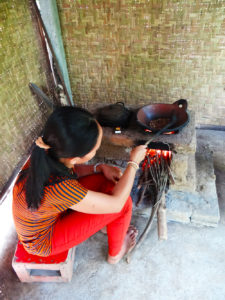 I breathe the smell of crushed ginseng in deeply. I watch as Putu’s sister squats above a woodfire roasting the coffee beans they sell at the reception area and I scream loud enough to coax Bigfoot out of the surrounding forest as I catch sight of what looks like the poster animal for rabies.

It’s a luwak. A civet cat, more precisely. Locked in a cage next to one or two more, it looks at me with little interest before retiring to the back of its grim boudoir. 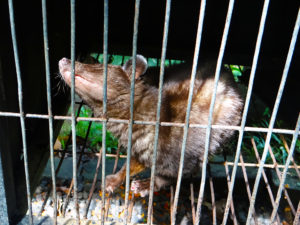 Putu laughs at the high pitch of my scream and introduces me to the animal that gives “the most expensive coffee in the world” its name – lauded and reviled by coffee connoisseurs in equal measure.

As I start to see where this is going, Putu grins at me and tells me a little coffee legend.

Like Namibia, Indonesia was once “home” to colonialists, Dutch ones who got the indigenous population to plant large amounts of coffee for their drinking pleasure while forbidding its consumption by local farmers. Of course, the farmers were like “Oh, hell, no!” and sneaky-sneaky drank the coffee anyway.

But only after the coffee cherries had been eaten by civet cats who later defecated the undigested coffee beans which the farmers then collected, cleaned and roasted to make the coffee Indonesian pop stars keep grinning about on billboards.

It takes a while for me to realize that, given the reality, Putu’s still going to ask me to taste some. I’ve eaten some pretty weird things in my life, and by that I mean sushi, but the most rational voice in my head advocates for drawing the line at drinking what Putu calls “catpoopcinno.”

To abate my awkward stuttering, he gives me the skinny on being the plantation’s designated “poop hunter”. The meticulous, early-rising man responsible for searching for wild civet cat haunts on the plantation and rummaging for coffee beans in their daily dumps.

The good stuff can cost up to U$100 per cup which is why I know the N$50 cup Putu sets down in front of me is budget at best.

I swirl it in my mouth having taken his advice of no flavour eradicating milk or sugar and I tell him I prefer the stuff I get at breakfast buffets in two star hotels.

To warrant the caged animals, the crack of dawn wild civet poop hunting and the grinning pop stars, I expected to be blown away but it’s a little anticlimactic. That and guilt trippy when I read a Guardian article about force feeding civet cats to meet the demand of poop coffee and wonder which planet I’m on exactly. 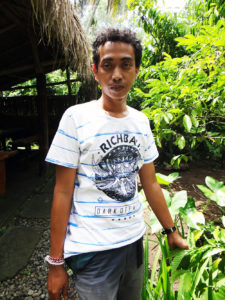 Putu doesn’t want to hunt faeces all his life.

When he’s older and he’s passed the poop-hunting baton to his sons, he wants to be an English speaking driver like Yadi before retiring near the water to catch fish.

It’s a great dream and we cheers to it with a cup of coffee. Coconut flavoured like the kind I buy for my dad, not the kopi luwak. 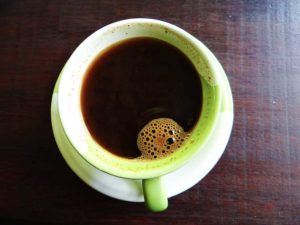 What's in A Week