A bald man hovers above the stairs at Dreamhouse.

His eyes are bulging and bloodshot. His beard is big, black and curling below eyebrows that are stronger and blacker and arched. And though someone as bodiless and beastly seems impossible to miss, this is the first time I’ve seen him in the months in which I have huffed up three flights of stairs to my room in the four floor walkup I’ve recently been calling home.

Though he’s been perched since the start, I see him by chance on my last morning there.

My camera flash illuminates the wood above the stairwell while I take some farewell photos and suddenly there he is. Scowling out of the darkness as a shudder ripples down my spine at the thought of all the times I’ve opened my door at night while his gaze bored balefully into my back. 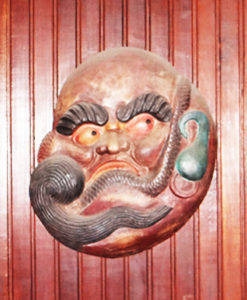 The bald man is one of many strangers and surprises at the odd little guesthouse no one seems to have heard of.

It’s snuggled between a place called ‘Cozy Home’ and another place instructively titled ‘Walk Inn’ but when I mention Dreamhouse to grinning food sellers and homeless backpackers, their faces nod at the former  and blank at the latter as if there is a gap in reality where my guesthouse should be.

And perhaps there is.

Because Dreamhouse is a step into something else.

From the moment you walk in you are engulfed by art. Filled with frame after frame of paintings swirling in tones of purple and blue, Dreamhouse looks like an art gallery only moonlighting as a guesthouse and perhaps this is why few people venture in on hot days with Chang beer beckoning at the assortment of restaurants just around the corner.

I walk in après rejecting ‘Walk Inn’ and after a day spent searching for somewhere to stay.

I’m hot, drenched in sweat and I’m looking for a place with a pool but from the street I catch sight of a mural featuring a cluster of women seated high in the sky. Fat as cherubs, naked as the day they were born with hair as fiery red as Botticelli’s ‘Venus.’ 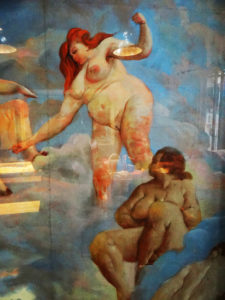 I follow the art. And as I stand in the reception area gazing at the tens of canvases featuring strange Buddhas, drowned spirits and stirring scenarios, I get the feeling that I have found my Thai home and it’s not long before a young man named Guy asks me if I would like to see a room.

The walk up stairs is one that takes me through a blue and yellow mosaic stairwell, past a large mirror and three huge embossed canvases carrying harlequins and grand parades of ancients on elephants in verdant gardens while a look below knee level reveals two stone statues in traditional Thai dress.

When we get to the room it is just as aesthetically pleasing. The bedcover is embroidered with ornate flowers, the chairs and headboard are wooden and adorned with carved birds and dragons and each has claws for feet while the free standing cupboard takes centre stage looking for all the world like it was just shipped in from Narnia. 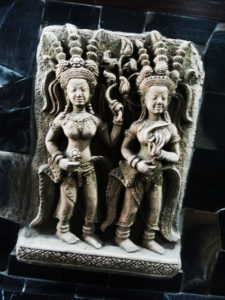 The place is beautiful.

I’ve seen modern rooms, cramped rooms and rooms that are sure to give me the Black Death but  this is perfect.  It’s up a million stairs, a little walk away from the food stalls at Somphet Market and in the ten minutes that I am standing there, I watch as three mosquito bites emerge on my skin but I take it. 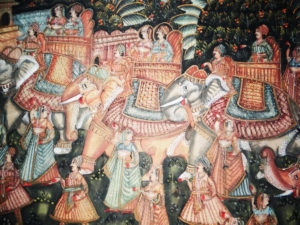 A few weeks later when my Colombian friends from the monastery ooh and ahhh at what a great place I’ve found for myself, I decide to ask the manager about Dreamhouse’s history revealed in the strange meeting of Italian and Thai aesthetic.

Unfortunately, he doesn’t know much. Only that the place originally belonged to an Italian man who painted all the pictures downstairs but who passed away a while after the current owners took over.  Since then the Thai aesthetic has seeped into the quilts and the carvings while the downstairs area has been left relatively intact with strange swirls and Renaissance re-inventions. 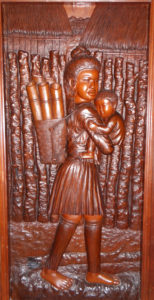 That’s as far as my sleuthing leads and for a while I enjoy being the only resident in the dark wood house besides the landlord.

But eventually they come.

They catch sight of the painted women from outside, get lost in the canvases at reception and before they know it they are engulfed in the old Italian’s man’s dreams.

Of blue and wood and women in high heavens. 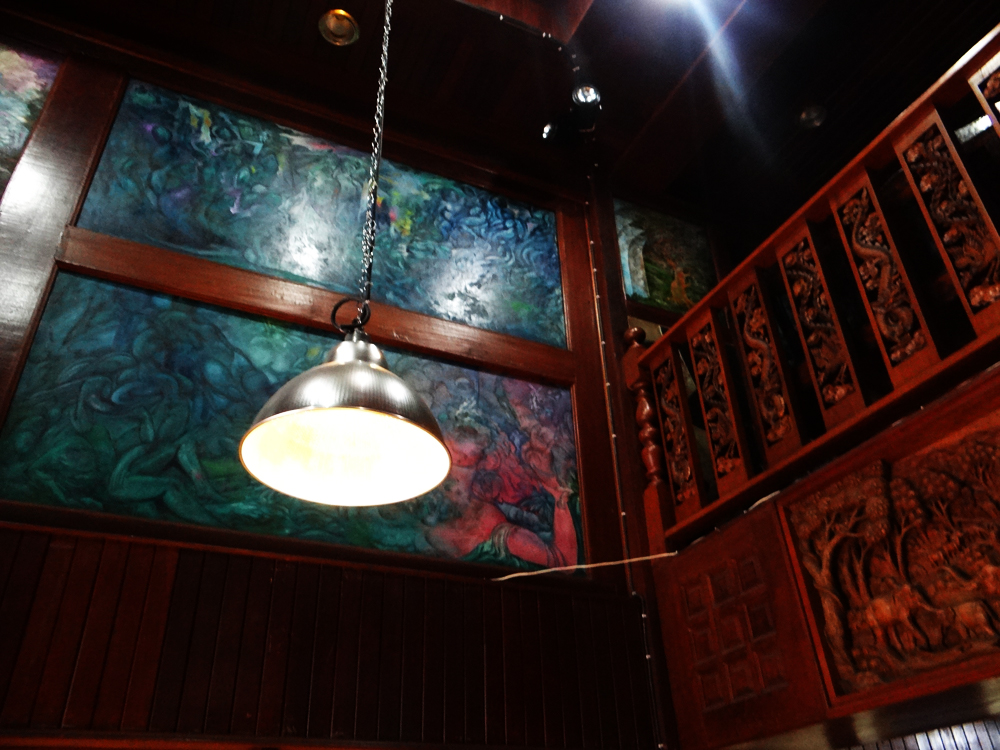