It’s the first Thursday of the month and Cape Town’s art enthusiasts are out en masse. 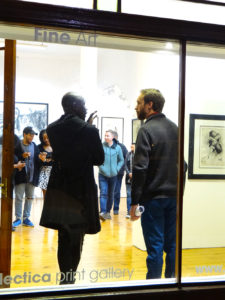 An effervescent clash of students, hipsters, artists and collectors, the crowd that pulses through Cape Town’s city centre on a chilly night at the beginning of June is one undeterred by the cold, enflamed by art and warmed with big gulps of wine in clear plastic cups a doorman on Church Street allows into a pristine gallery with a short sharp nod.

The slipping in and out of galleries open way after hours, the Rastafarians selling their wares and being approached for a little something else is First Thursdays. 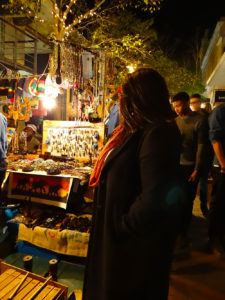 Though some people skip the galleries altogether, the ones who don’t have free reign.

Spaces that seem intimidating by day are cast in the welcoming hue of night. Stern-faced curators who may turn their nose up at people who know to look but not touch but are about five pay raises from buying can peruse the work of South Africa’s finest with its guardians disappeared in a more accepting crowd and the solo gallery goer can’t help but strike up a conversation as elbows bump, guests tut and cocked heads attempt to make sense of all that this evening entails. 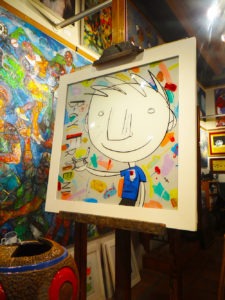 Africa gleaming out of box at a handicraft stall, buskers belting out tunes near Café Mozart as the moneyed peer out at the up and coming defiant in their tight jeans, intentionally ragged sweaters and windswept hair.

Calling to mind a scene by Jack Kerouac, the magic of First Thursdays is sheer appreciation.

How fashionable it’s become to take some time to look at what’s been created, to peer into a few galleries and find some favourites. 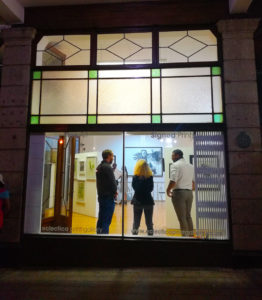 Eclectica Contemporary where a pile of First Thursday maps are placed near the back of the room so you’ll have to pass the art to discover the way to more of it. The Smith whose photography is ‘Hush Hush’ and Gallery MOMO where artist Stephane E. Conradie reimagines objects found in working class homes in ‘Ordentlikheid: A Creolized Object’.

Often gripping and relatively diverse on the street and in the 46 participating galleries, First Thursdays compels in its call to explore the mother city by foot as you wade through the minds of some its most exciting artists, meeting some in the street, others in bars and each in their display of blood, sweat, tears, paint, mixed media, sculpture or ink. 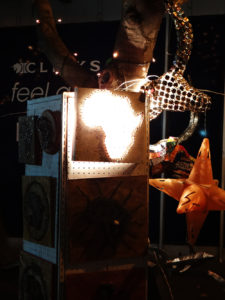 First Thursdays takes place in Cape Town every first Thursday of the month. Find out more at www.first-thursdays.co.za