The key to loving Krabi is to embrace its little quirks. Blink a blind eye at the fact that the long-tail boat zipping you across the Andaman Sea is being powered by a tube funneling petrol from a Pepsi bottle. Turn your sunburnt back on the Tsunami evacuation signs peppered all over the islands and make the most of your brand new friends be they feline, monkey or gecko.

Do this and you’ll be all set to enjoy one of the most beautiful places in the world.

Famed for its limestone peaks which seem to float lightly in its impossibly blue ocean, Krabi’s most incredible scenes are a thing of legend, cinema and dreams and are best explored by boat.

By long-tail, a South East Asian watercraft with its distinct decorated nose sticking proudly up at the sky or by one of the speedboats which are slowly edging the traditional boats out as Thailand’s conservation efforts regulate the logging of natural forests.

Situated just an 1 hour and 30 minutes from Bangkok by air, Krabi’s appeal will be peddled right in Don Mueang’s domestic departure terminal.

Touted alongside places like buzzy Phuket and snazzy Ko Samui, Krabi is a short boat ride from James Bond Island and Maya Bay which provided the backdrop for the Leonardo Di Caprio film ‘The Beach’ (2000) making it an easy sell that will undoubtedly have you heading to spots like Railay Beach. 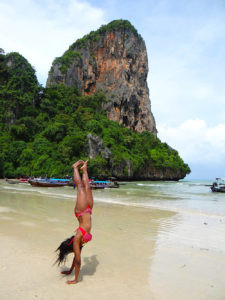 A rock-climbing haven and a vibrant peninsula bustling with luxury resorts, backpacker dens, reggae bars, smoothie spots and massage parlours overlooking the warm Andaman Sea, Railay is a great place from which to embark on the full day island-hopping tour your rubber arm would have paid for at the airport.

Luckily and like most things in Thailand, the tours are worth it.

Worth getting absolutely drenched in the low season’s rougher seas as you surge through blue water praying you won’t get caught in one of the sporadic monsoons that categorize the time of year, that is. 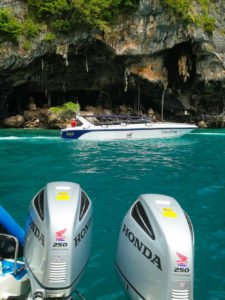 The trick here is to throw something quick-drying over your swimsuit and perhaps nix shoes altogether.  Wet, wild and with the occasional tourist puking into a plastic bag, Krabi’s speedboat tours are a must for those eager to island-hop efficiently.

Bouncing from Railay Beach to Phi Phi, one is easily enthralled.

First by the Viking Cave, a dark, gaping concession that can only be viewed from the boat and is home to a gathering of swifts. Economical birds known for using their own saliva to make their nests which in turn are harvested and used to make the Chinese delicacy bird’s nest soup.

Though eating a nest is an experience one may want to add to the travel log, these nests can set you back upwards of US$2,000 per kilogram, depending on grading and are the costliest animal product consumed by man.

Their special powers? The nests are said to do wonders for one’s skin and have been used in Chinese cooking for over 400 years mostly as spit soup.

Just as intriguing a short hop from Viking Cave is Monkey Bay where a colony of crab-eating macaques are none too shy about biting, scratching or giving you a bout of rabies. Though tourists are advised not to feed the monkeys, it’s not unusual to see one or two sucking on a bottle of Pepsi while staring you down with disdain.

After a swim and some snorkeling which reveals a Dory or two amidst the coral, leisure time is wonderfully spent on Phi Phi Don and Bamboo Island. The latter which originally got its name for its wealth of bamboo much of which was completely destroyed by the 2004 tsunami.

It’s bright blue waters and blinding white beaches remain, however, and are the perfect place in which to end an island hop, head back to Railay and start something else entirely…

Boasting a street side hive of fresh snapper, lobster tails and prawns barbecued alongside simple restaurants serving delicious Thai dishes and cocktails, eating one’s way through Railay Beach is an adventure in itself.

After the sun sets on the limestone cliffs and before the thrum of lantern-lit reggae bars set something loose in your island soul.

The Monk and the Military Man