As Africans we’re weaned on British and American television with a splash of Telemundo to keep things colourful but beyond some grudging affection for Mister Miyagi and our easy appreciation of Jackie Chan, we rarely get any insight into the wealth of character, colour and kookiness that is Asia.

My first port of Asian call is Thailand. 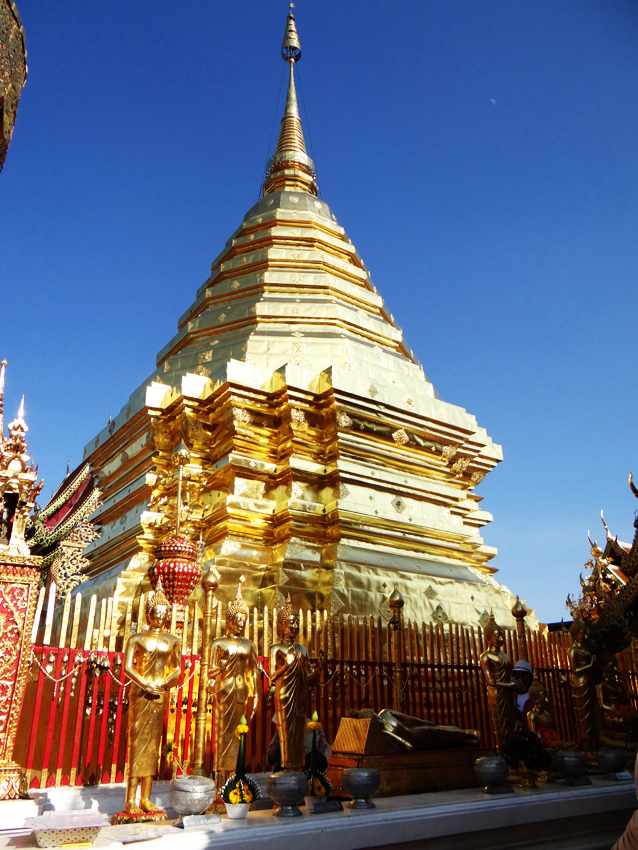 Squatting Toilets – In Thailand people prefer to squat over a hole in the ground when doing their business.  Upscale squatting toilets are made of porcelain and tourists are encouraged to drop trou and drop down into the natural position for optimal bowel movement.

Bum Guns – Also known as “ass hoses” and “mud butt killers” are taps and nozzles that one can find next to Thai toilets to be used in the affair of cleaning your butt hole. Generally, toilet users angle the bum gun towards the anus and squirt at the sullied orifice after relieving oneself of their green curry.

Electric Showers – Water and electricity are deadly bedfellows but, in Thailand, warm water is heated by an electric box that is above or next to the shower head for one’s lethal pleasure. Seriously, though. This isn’t cute. People have died in these showers.

Cooldrink in a Bag – For no reason that makes itself easily apparent, Thais are very fond of plastic sandwich and carrier bags. They use them to sell portions of fruit, sliced sausages and even as takeaway holders for soup but you’ll never be as amazed as when a street vendor dumps some ice,  orange juice and a straw into a plastic bag and charges you ten Baht for the trouble. 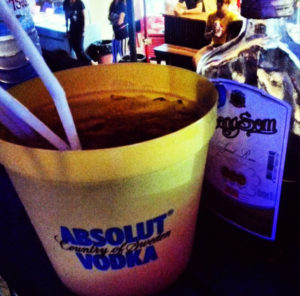 Buckets – Local whiskey or your preference of vodka or rum plus mixer dumped into a kid’s play bucket with ice and a couple of straws. For the inebriate’s pleasure.

Everything on a Stick – From boiled eggs to baby squid and scorpion, the Thais take much joy in skewering anything that lends itself to impaling. 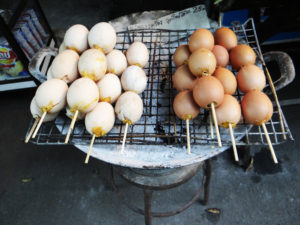 Night Markets – Thailand is legendary for its night markets. Boasting stall  after stall of clothing, souvenirs, food, jewellery, handbags and more, night markets spring up a couple of days a week and are ace at getting you to blow through your Baht like there’s no chance of tomorrow.

Lanterns – Lights are an integral part of Thai life. Fairy lights, floating lights and lanterns wished upon and let loose in the sky are all part of the kingdom’s charm. Puzzle type lanterns can be bought at night markets and are famous for being put together with the kind of frustration typically reserved for Rubik’s cubes.

Spirit Trees – In Thailand, it’s not unusual to see a tree trunk adorned with colourful cloth. This is to indicate that a spirit lives in the tree and that it should not be cut down. Spirits also live in ornate miniature ho 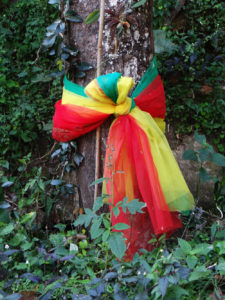 uses found outside shops, buildings and along dangerous roads and are kept out of the house and benevolent with offerings of food and incense.

Feet– In Thailand feet are considered the worst things there ever were and it’s customary to remove your shoes when entering a home or a building. Do not go to Thailand if you have a thing about bare feet because they are everywhere and you will either wet yourself or break into hives at the proliferation. Depending on whether your thing is to freak out or Freudian.

Ladyboys – If you see a seriously great looking Thai woman on the streets of Bangkok, chances are decent that she has a schlong. Thailand is Transgender Central and though most Thais are good looking, the men dressed as women will have you seriously reevaluating your orientation. 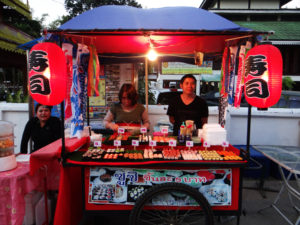 Street Food – In Thailand people eat on the street.  Hawkers sell everything from snacks to three course meals and serve it all on the go or at functional plastic tables. Happily and unlike the dance with salmonella one can expect here, Thai street food is delicious and far better than anything you can eat indoors.

Massage and Tattoo Parlours – If you can walk down a street and you don’t hear a tiny Thai woman saying ‘Masaaaaaage” in a little sing song voice then you aren’t in Thailand. As prolific as tattoo parlours, massages are cheap, everywhere and an essential part of a great life. 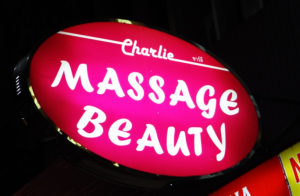 Three on a Bike – Entire families, helmetless and holding groceries on a motorcycle is an everyday sight. Motorcycles are also used to transport television sets, furniture and big black dogs. By twelve year olds.

Dogs – Strays are a staple of Thailand and it is rare to see a hound that actually belongs to anyone. Dogs are fed by store owners, locals and monks and generally travel in pairs or packs unless they are lone and wearing a muzzle.

Book Swaps  – At backpacker hostels and some bookshops in Thailand, new literature is as easy as swapping your Bukowski for  the store’s Adichie,  if your book doesn’t look  like what the chang dragged in.

Fish Spas – Basically, you stick your feet into a tank full of Garra rufa fish…and they eat your dead skin.  What? It’s ticklish. And exfoliating. It’s also illegal in parts of the US and Canada. Because hygiene.

No Spitting and No Durian signs  –   Apparently people spit on the floor in carpeted buildings and Durian smells like hot trash. And nobody wants either of those things.

Festivals – Thai people are always celebrating something.  From the King and Queen’s birthdays to Songkran to an assortment of Buddhist holidays, there is always an air of celebration replete with lights, night markets, pavement theatre and people shooting water guns in the street. 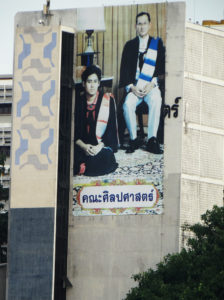 King Bhumibol Adulyadej – Insulting the king and defacing his image means jail time. Much respected and represented in just about every building in Thailand, images of the King are everywhere you go and a royal anthem honouring the king is played before movies in theatres as well as before and after television broadcasting.

Monks – A great thing about Thailand are the monks.  Serenely imbuing the whole place with a sense of holiness and grace, the sight of a monk is always enough to make you smile. Especially when you see one talking on an iPhone at a 7-Eleven.

Free Wifi – Thai people love the internet and Free-Wifi signs can be found everywhere that calls itself anywhere.  Fast and free, Thailand is a series streamer’s dream.

Suit sellers – Walking down a street in Bangkok you can be sure that someone is going to try and sell you a suit. Fast talking, insistent and with no shame about advertising their wares with posters of George Clooney wearing Armani, suit sellers are as ubiquitous as ladyboys when it comes to people hanging around on corners. 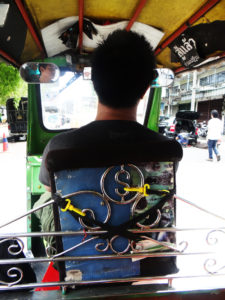 Tuk-Tuk Drivers – When it comes to Bangkok tuk-tuk drivers you will hear three phrases about a hundred times a day: “Where you go? Where you from? Ping Pong show?” The key here is to smile, shake your head and break eye contact or you will find yourself talked into a trip to the red light district with a detour to get fitted for a suit.

Ping Pong Shows – Though it sounds like some kind of tournament, a ping pong show is less respectable sports meet and more Thai women shooting ping pongs, goldfish and Coca Cola out of their vaginas.

7- Elevens – If you can find a street without a 7-Eleven on it in Bangkok, I’d like to see it. Selling everything from hard liquor to underwear every ten metres in every direction, 7–Elevens are popular with locals, tourists and the stray dogs that lie in the doorway to enjoy sporadic gusts of air-con.  7-Elevens have the best air-conditioning in the city.

What I mean is, if it gets Bangkok hot and you know once and for all that butt sweat is real, go there.