I’m being very careful not to step on the ghost money. 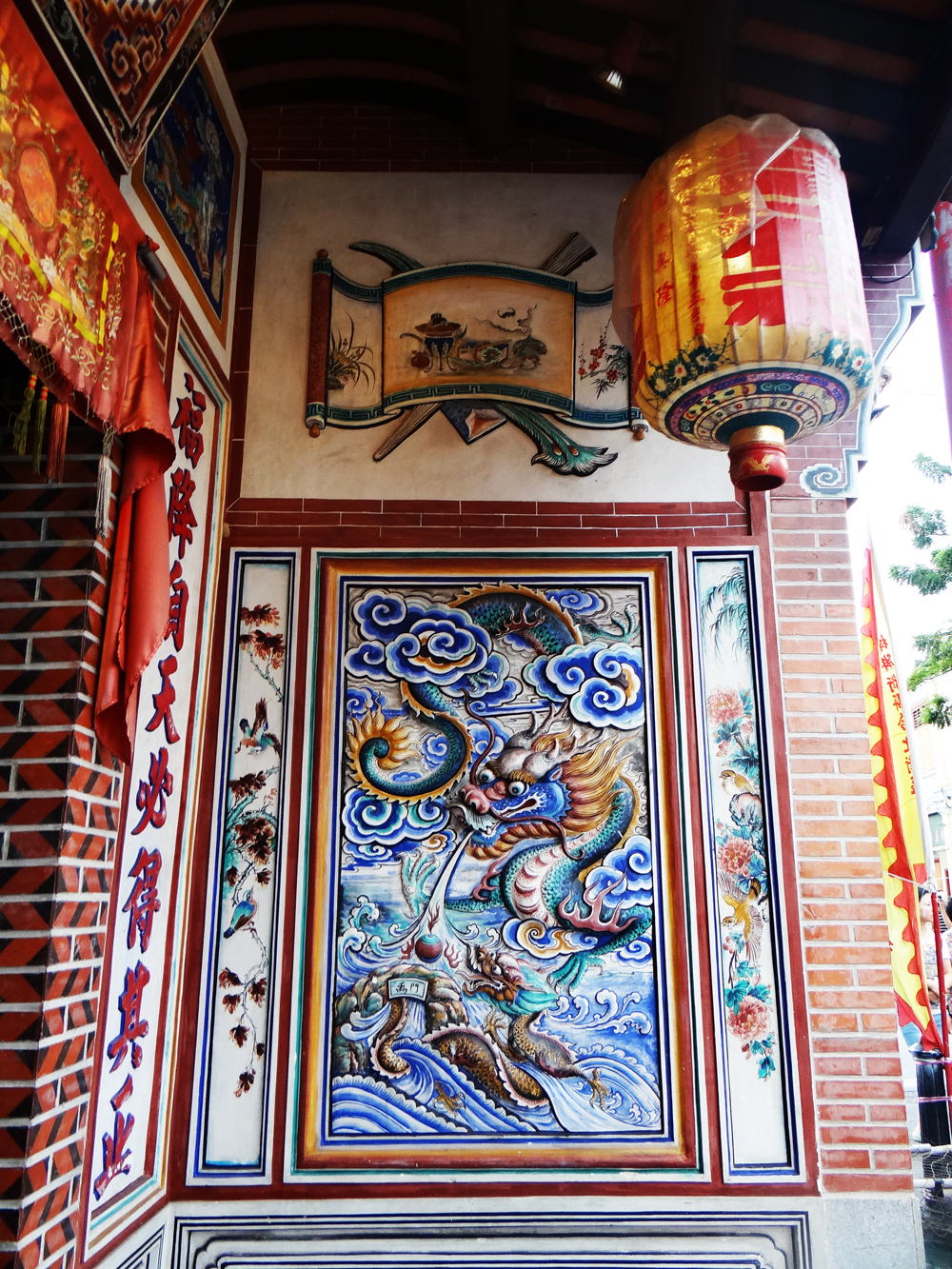 It’s burning in little leaps of fire or disappearing in graying piles of ash and, whether I believe in ghosts or not, a shiver still snakes down my spine and I still scurry to catch up with James whenever I spy even the slightest scrap of joss paper smoldering in the street.

Call me crazy but I bet bad luck doesn’t get any worse than accidently trampling all over some one’s offering to appease the devil which is why I’m hopping, skipping and jumping over the burning bribes and scampering past brightly lit shrines while trying to pretend that Penang’s Hungry Ghost Festival isn’t about the Chinese’s dreadfully departed out here on some kind of supernatural furlough from hell.

While I’m sending up prayers, silently screaming at shadows and trying not to be ushered into the afterlife by George Town’s ogling motorcyclists, James has stopped in front of a puppet show. 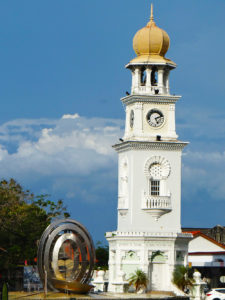 The stage is beautiful and the effort is commendable but we leave after a few minutes because one of the female puppeteers is clearly visible on stage. And looking very much as though she would like to end herself.

Right there. Right then. For our viewing displeasure.

I know this because a few nights later we’re sitting at Restoran Kapitan on Chulia Street and this freckled Australian bird is telling a man who may or may not be her grandfather that George Town is a UNESCO World Heritage site.

Though she’s clearly within her rights to be ecstatic, she’s saying it like they just won some big prize which turns out to be the sky opening up and pissing all over  them as they walk out into the street.

As an avid eavesdropper and because James insists on aggravatin 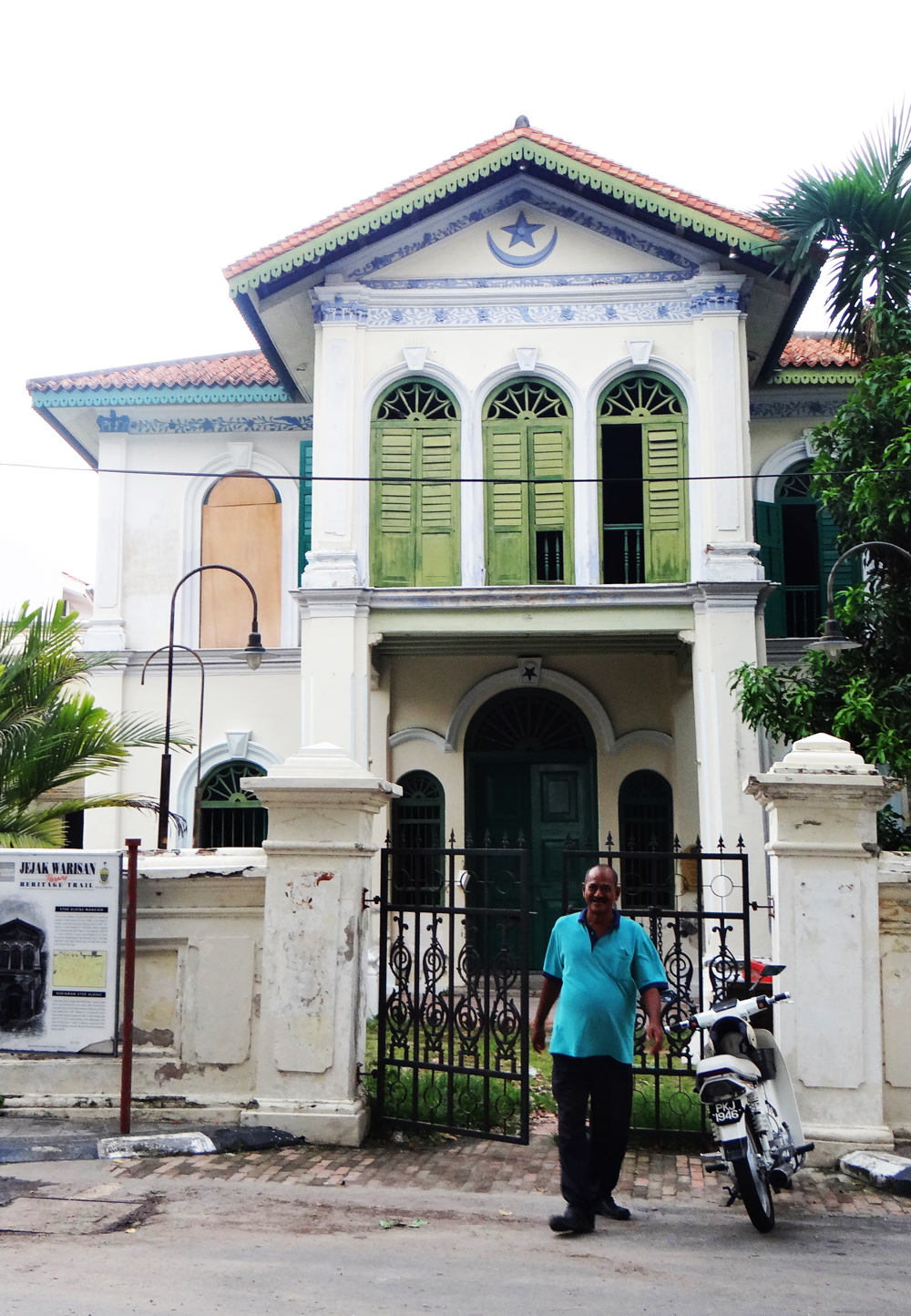 g the itch, this isn’t the first time I’ve heard that little gem of knowledge and sophistication thrown into a conversation.

All a little alarmed by George Town’s multi-ethnic population of Indian, Malay and Chinese people making their way through crumbling British colonial structures, past Indian temples, Chinese shophouses and buildings literally sprouting plant life, tourists seem to cling to this phrase like a life preserver while trying to survive walking in a city that seems to frown on sidewalks.

What George Town has instead are stray dogs. Stray dogs, languishing Indian men and food.

Delicious, abundant and affordable Malay, Indian and Chinese cuisine which ensures you have a hell of time deciding whether to be seduced by the smell of chicken satay, piping hot char kway teow or  rounds of decadent cheesy roti canai which are all an integral part of Malaysia’s celebrated street food landscape. 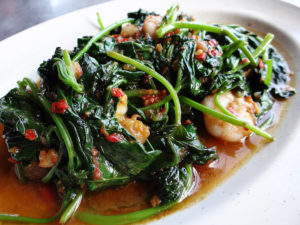 After drinking our way through the backpacker bars and lively liquor spots in and around Chulia Street, James and I stumble into Restoran Jaya at around 4am to sample some of these venerated victuals on my first night in town.

And this where I eat the butter chicken and  roti canai of my life.

The next day is just as glorious. We eat breakfast at a place called The Mugshot Cafe where the barristers think rapidly talking about pulling espresso shots and actually pulling espresso shots  is the same thing and then we head to George Town’s famed clan jetties which are no less than century old wooden houses on stilts over the Strait of Malacca. 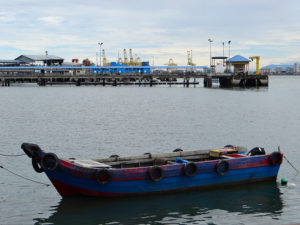 Though it’s awfully awkward walking past people’s homes, peering in and seeing them watching television, drinking coffee or dying a slow and dignified death, the Weld Quay Clan Jetties are incredibly preserved and look out on a bright blue stretch of sea that does much to calm our restless souls.

As do our minibar sized slugs of Johnny Walker and Smirnoff smuggled past a shrine and a woman selling beer on her patio.

At some stage James and I part ways and get some work done.

For me this means walking around George Town looking for Ernest Zacharevic’s street art trailed by a Korean couple who follows me around like I have the slightest idea of where I’m going. This while I fend off an endless parade of Indian men who have clearly never seen a black woman in the cinema or on the street. 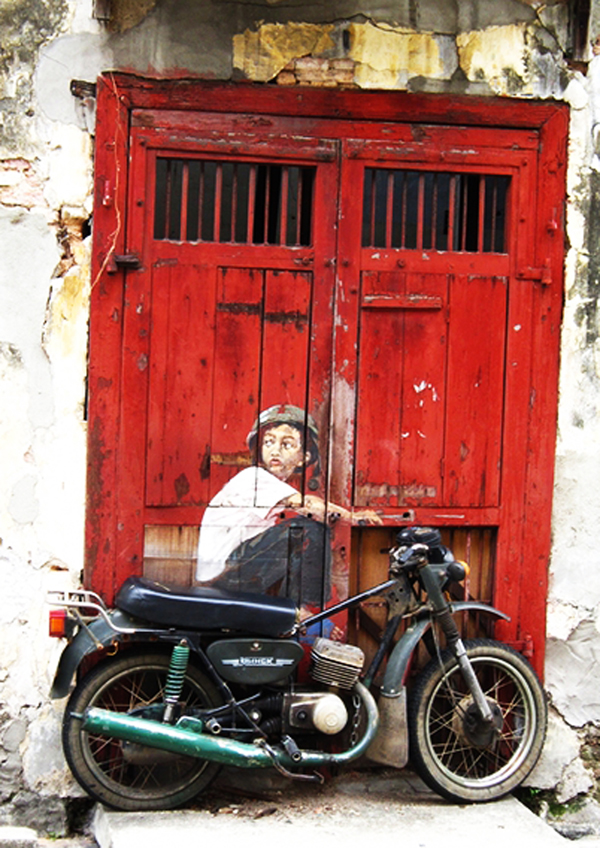 Wanderfully and when not being stalked by Koreans or Indians, I’m lucky enough to let the beauty of George Town suck me in.

From the old trishaw paddlers using their last breath to ferry overweight tourists around the old city to the absolutely surreal sight of Chinese temples next to old colonial buildings sporting modern day street art and graffiti.

Though the streets are busy and buzzing, the architecture speaks of a religious harmony and personal freedom that isn’t quite mirrored in the world waging war beyond Malaysia’s borders.

And as I duck into a 7/11 to a dodge a mustachioed Indian man who has been following me half a block, I feel grateful to be privy to this pleasant though peculiar meeting of Indian, Malay and Chinese food, culture and architecture that endlessly astounds and continuously makes me think…

”Okay, seriously where the f*ck am I?” 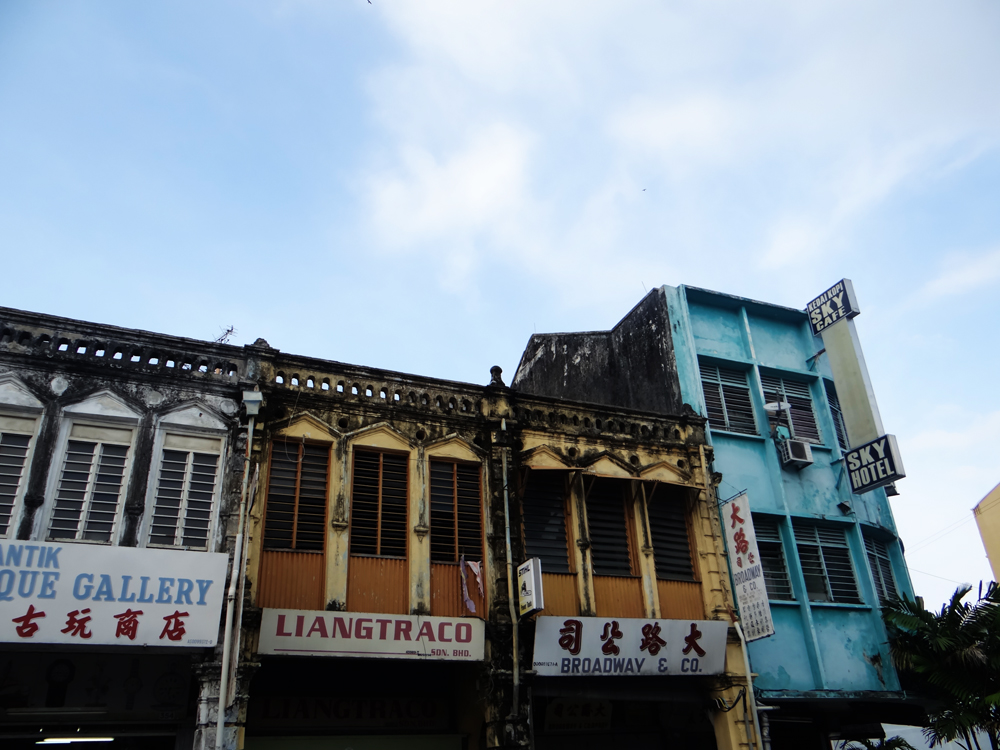