The first thing I notice about the new Pepata restaurant on Robert Mugabe Avenue is the “no guns” sign on the entrance wall. 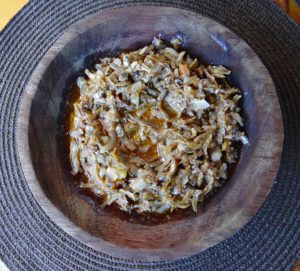 It’s a quiet Good Friday and there isn’t a good-for-nothing soul in sight so I wonder as to the kind of culinary adventures people generally embark on within to necessitate the caution.

A waitress yelling “I want my money! I want my money!” to a colleague does nothing to put one at ease about the sign. She eventually turns around with a grin so I know it’s just a few friendly threats between colleagues and later bookends her antics with a little dance, catches my amused expression and informs me that she’s exercising.

“The doctor says it’s good for the heart,” she says making healthy heart pumping motions a little while after a waitress has returned my request for a glass of the house red with the fake news that there isn’t any.

The fact that a friend of mine walks in a few minutes later and promptly has her identical request filled with, low-and-behold, a glass of the house red earns an eye roll but it’s Easter and the staff are friendly so I let it slide. 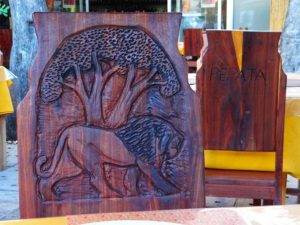 Or rather the lack of it.

After settling into one of Pepata’s charmingly engraved wooden chairs featuring scenes of lions and giraffes interspersed between others bearing the restaurant’s name, I make the vague and unmentionable error of ordering my traditional Namibian cuisine of omagungu (mopane worms) in chili, ombidi ikukutu (dry spinach) and eenangu (kapenta) without oshifima (mielie meal pap).

The waitress doesn’t know what to do.

She asks me if I want pap with my order twice, hears me say no just as many times and then just stands there hugging the menu to her chest, quite unable to leave without me changing mind.

We smile at each other amidst an oshifima stale mate until I win the Resolute Stare Olympics and she leaves to put in my clearly rogue order. 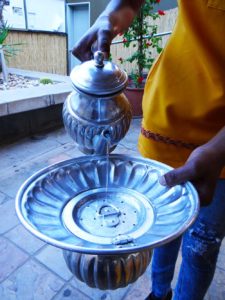 The food though succulent, delicious, well priced and generously served takes a little long to arrive but is well worth the wait.

Though I thought the mopane worms I tasted and hated as a child would be a homegrown episode of Fear Factor, my portion is perfectly spiced, moreish and everything one wants from a worm: thorough death and a distinct taste of not-worm.

A must-eat on a traditional menu that includes Smileys, matangara (tripe), marathon chicken, odjove, Zambezi bream and oshikundu amongst myriad more, the mopane worms compliment the kapenta and almost creamy dried spinach like nothing on Earth.

Clean, charming, authentic and happily averse to guns, Pepata is the brilliant job-creating brainchild of Jolokeni Nambahu who established the flagship Pepata in Hochland Park in 2015 with just two employees compared to her two eateries’ current 35.

Head here for a big helping of home away from home.

It’s cheap, it’s delicious and someone comes out with a silver urn so you can wash your hands before you eat with your fingers so you know it’s real.