It’s just after 07h30 on a weekday morning and the line for a little will to live is practically out the door. 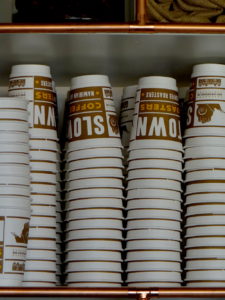 The bankers, the office clerks, the accountants and the randomly passing by crowd into Slowtown’s  establishment below the FNB Headquarters on Independence Avenue and many of them order their cappuccinos, lattes and macchiatos to go.

The crowding doesn’t happen every day but Joonas Leskelä can feel the beginning of a revolution. A caffeine conversion that beckons to the city’s coffee drinkers, people watchers and entirely exhausted with a flash of sparkling glass and the spellbinding smell of java.

He’s been managing the Namibian franchise’s second Windhoek site since 2016.

Somewhat fresh from “Original Jojo’s” where he made a name for himself as a café owner, events manager and vinyl collector of legend, Joonas is known for keeping things mellow, comfortable and effortlessly cool.

‘We want to create a place in town where it’s about coffee but you don’t have to be a coffee connoisseur to feel at home here,” says Joonas whose Finnish origins mean he’s been mainlining coffee since he was about 12 years old. 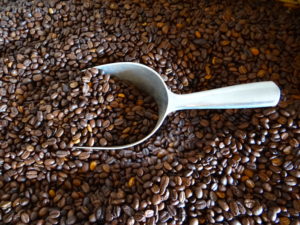 “My friend Mutaleni says, when she was a kid, Independence Avenue was a happening street before mall culture took over. Town is going through a bit of a revival and we’re going to be a part of that.”

Eager to join Street Cuisine and Cramer in their mod, minimalist and hip Independence Avenue renaissance, Slowtown has plenty in store to bring more people to Windhoek’s central business district. Not just to work but also to hang out.

“Slowtown is about coffee but it’s also about atmosphere,” says Joonas sitting opposite a swish olive green couch in front of a sprawling wall length art piece in homage to Slowtown’s Swakopmund beginnings by Elke Le Roux. 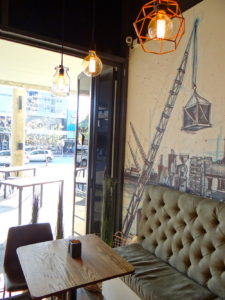 Elegantly illuminated, neat with wood and copper lines as clean as you like framing various blends of coffee, the best red velvet cake you will ever eat, to-go cups, an assortment of juices, cookies, muffins a little tea as well as roast beef and ham brotchens far more exciting than the term ‘brotchen’ would suggest, Slowtown presents as cozy and sophisticated with a touch of plush.

Head here to find out what all the Slowtown fuss is about and get a new sense of the city.

The coffee is great, the service is something special and, for the unabashed narcissist, the solo seats look into a mirror which comes with the added pleasure of enjoying your caffeine with the only person who matters.

Your caffeinated, rejuvenated and scintillating self 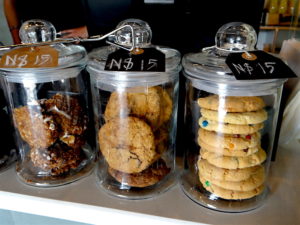