A young Korean couple is following me down Armenian Street in Penang. 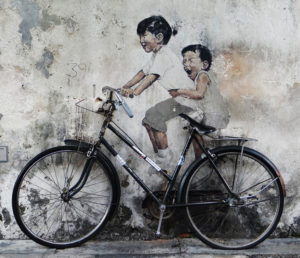 They don’t say much and they don’t really want me to notice but every time I turn around they’re smiling back at me shyly, quietly urging me to oblige to be their unofficial tour guide as I walk through the streets of George Town looking for Ernest Zacharevic.

Though the camera-toting hordes I see scurrying up and down the street suggest the search for something antique and aging, the young Lithuanian artist painted the murals they’re after a mere two years ago under the collective title ‘Mirrors of George Town’ which formed part of Malaysia’s annual George Town Festival. 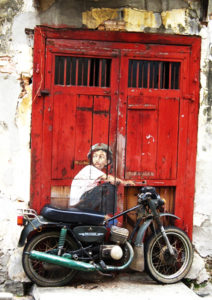 Since then it seems the city has been amidst a street art palooza which has added something subtly subversive and indubitably delightful to the UNESCO World Heritage site famed for its surviving British colonial architecture, Chinese clan jetties and shophouses as well as assorted temples, churches and mosques.

With local artists like Louis Gan adding their signature scratch to assorted alcoves and alleys in the inner city, George Town has rapidly become a hive of outdoor art that sees the metropolis buzzing with young tourists eager to mug in front of giant cats, Pixar minions and Zacharevic’s interactive murals which invariably require one wait ten minutes in a haphazard line as people vie to have their photographs taken on a real life bicycle, a motorbike and a chair incorporated into his wall paintings of three lifelike Malaysian children.

These are some of the favourites but in his reflection of George Town, Zacharevic doesn’t forget to include the ubiquitous trishaw paddler. 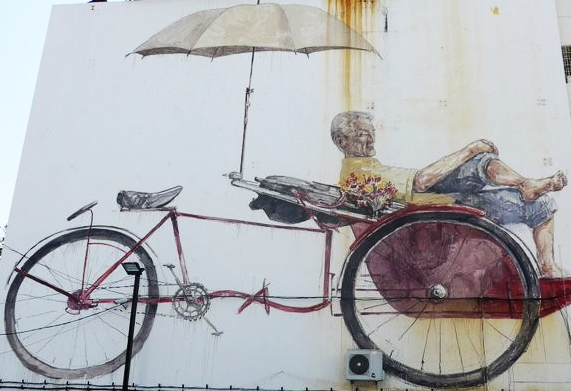 A typically aged man who can be seen ferrying tourists around the inner city, recalling a mode of transportation that has long since been abandoned by the locals but still beguiles backpackers and tourists.

His two children at Chew Jetty is another popular mural which can be seen painted onto a wooden house on stilts floating above the Strait of Malacca. Here the children mirror the Chinese youngsters who can be found living in the century old clan jetties which were initially settled by Chinese immigrants  who made the waterfront their home in the 19th century.

Though Zacharevic’s murals stand out due to their recurring themes of innocence, nostalgia, his use of props and their ability to blend almost seamlessly into their canvas structure, other street pieces are gaining fame as they pop up all over the city depicting everything from Hallo Kitty to Marilyn Monroe to Banksy’s black rat, all in varying degrees of accomplishment. 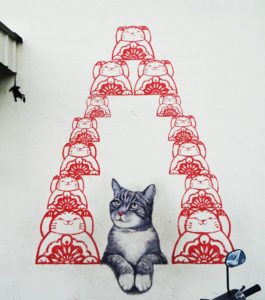 The city of George Town has further endorsed and encouraged regulated street art through the 101 Lost Kittens project which is a 2013 street art initiative incorporating murals of painted cats aimed at raising the kind of awareness that will help find homes for the stray animals.

Also jostling for one’s attention on the streets of George Town are the wrought iron wall  caricatures which can be found curling  neatly over white walls in the old city while humorously expounding on the history of Penang’s streets without defacing the heritage site.

Boasting painted and wrought iron characters smiling or zooming past you on stationary bicycles, George Town, and particularly Lebuh Armenian, is a street art archive that can be endlessly explored between quaint shophouses, eclectic cafes and intimate art galleries which all add to the unique cultural flavour of a city so singular it is being persevered as a pride of the planet. 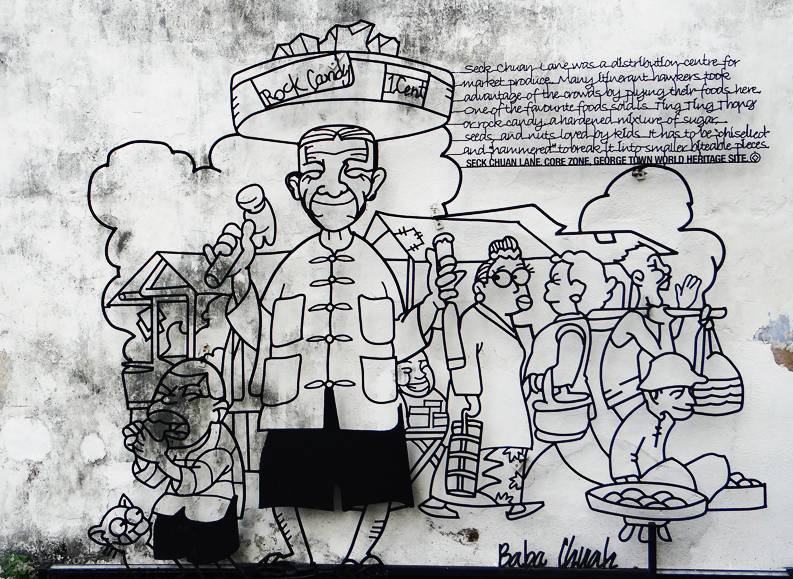 As for me and the Korean couple? We don’t find Ernest Zacharevic the man but we do pause to look into his mirrors while marveling at how the reflection changes with every new passerby and we certainly laugh at how each piece invariably inspires odd and excited interpretations.

Sometimes there are adult Americans, other times there are young Thai children eagerly inserting themselves into the scenes and instilling the art piece with a new expression, a new mood and a new nationality.

And as people from countries and corners we can scarcely imagine queue up to fall down one of Zacharevic’s painted rabbit holes, we are poignantly and pleasantly reminded that George Town, joy and art is for all. 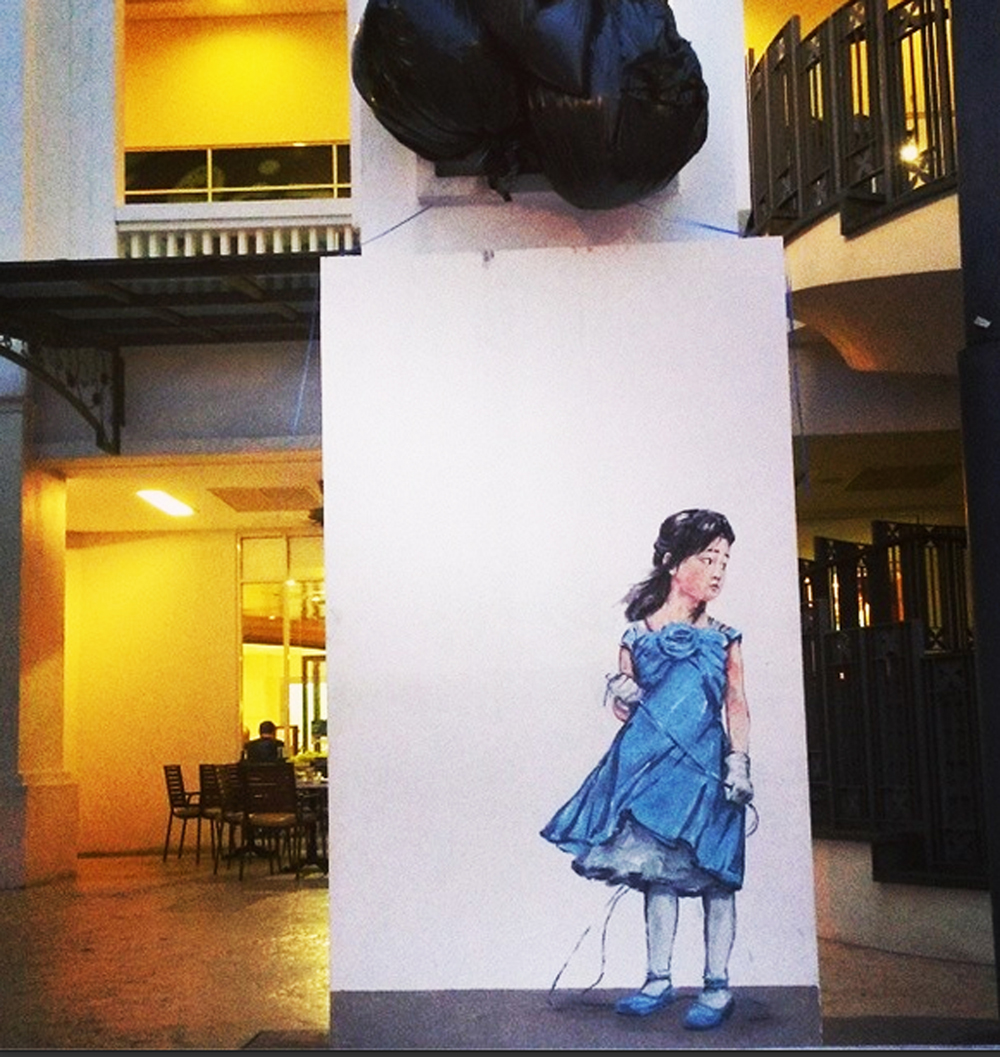