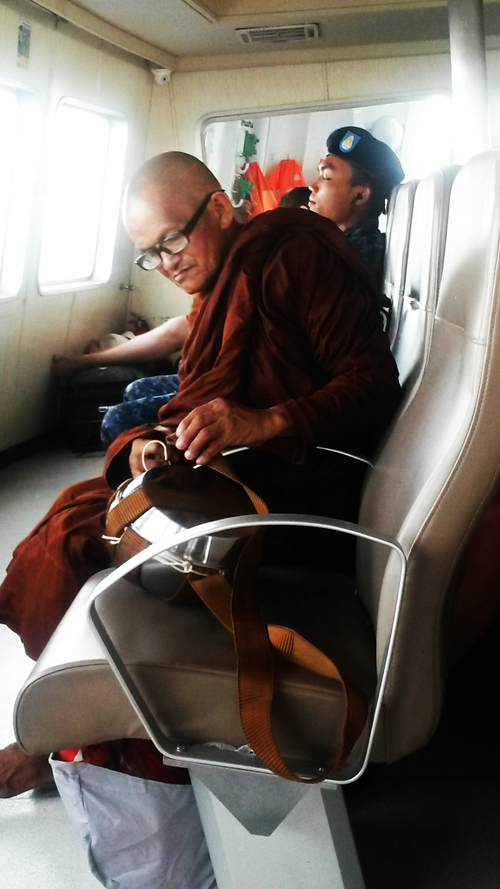 A monk gets on a ferry from Ko Samui to Surat Thani.

He is barefoot, bald and beaming out towards the ocean as his arms emerge from the mystery of his saffron robes and he settles into a chair about six seats from mine on the floating sea train.

I stare at him the way people stare at me in Thailand. I bore holes into his head, his hands and his dirty feet with the same insatiable curiosity that often ends in a request for a photograph. Not because I’m famous, pretty or have a particularly mesmerizing growth emanating from my forehead but simply because “Chocolate! Chocolate! You look like chocolate.”

Though he doesn’t look my way, I am happy to see him.

I’ve been in a dull though perpetual state of terror since I arrived in Bangkok three weeks ago mainly due to the fact that I flew to Asia just a few months after the disappearance of flight MH370, I moved to Thailand six days after the Royal Thai Armed Forces launched a coup d’etat that has reduced the roar of Bangkok by day to the whisper of Independence Avenue by night and I’m currently on the same sort of vessel that just sank in South Korea.

To this assortment of anxiety I add the fact that I’m on my way to Phuket after a drunken Filipino told me he left soon after the tsunami because fear of the sea kept him up at night.

Like I said, I’m happy to see the monk.

His strong, quiet presence and his endless smiling at empty space soothe me and I feel as though nothing bad can happen while he is aboard. Feeling safe, I finally relax and read a few pages of a book and when I next glance over at him, he’s gone.

His metal food container and his large sling bag are right where he left them but instead of a pair of bare feet between the two, the feet I see are clad in boots.

The big, black boots of the junta. 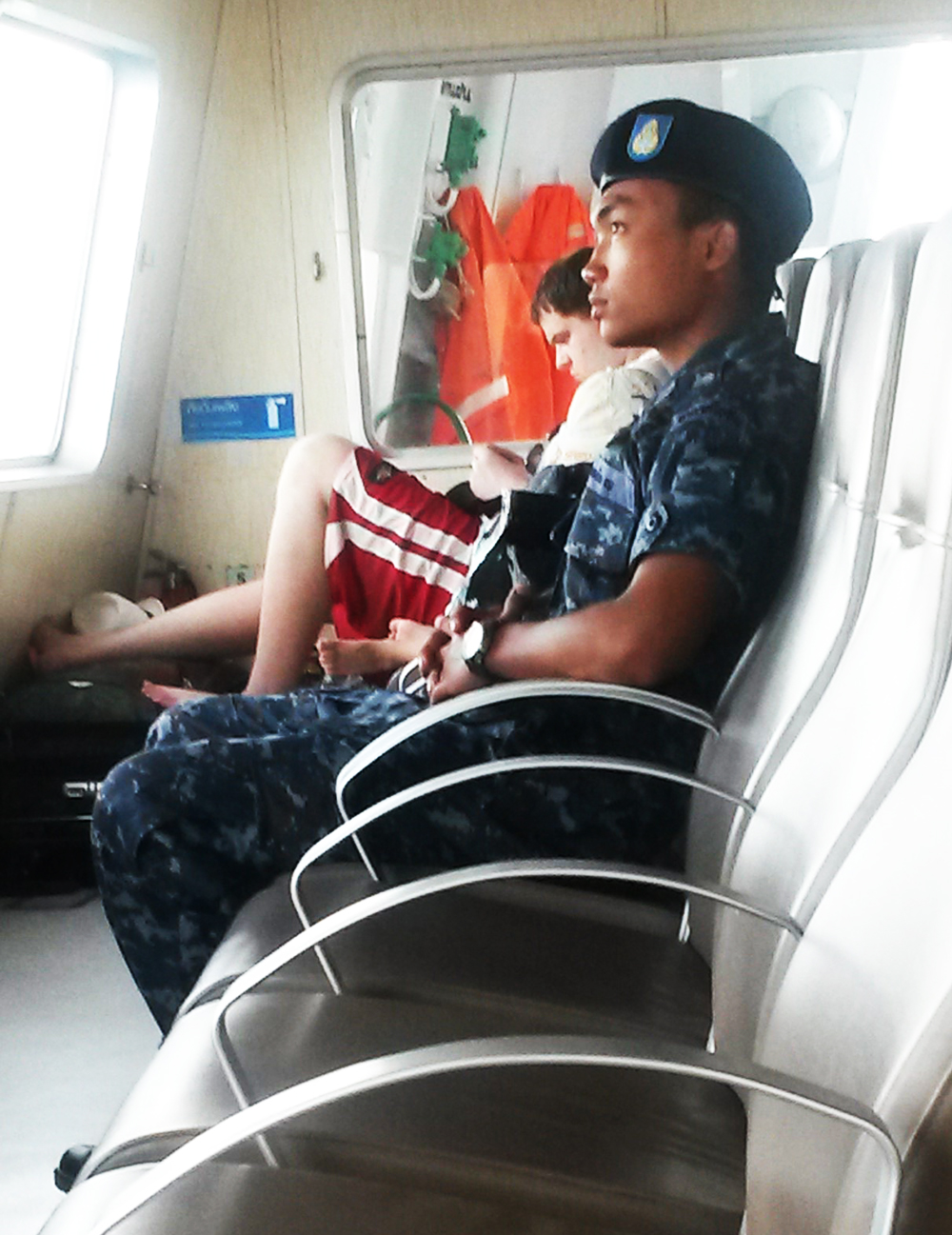 The military men who have overthrown the government and who I promised my family and friends I would stay far away from when they told me to cancel my trip to coup country.

I know it’s impossible but despite all logic, age-difference and bone structure, I can’t shake the feeling that the monk and the military man are the same person.

They sit in the exact same spot in a similar way with their legs outstretched and their heads cocked towards the right window and they both occupy space with a palpable serenity that seems to suggest they are kindred in tranquil spirit.

With tense apprehension and with much more caution than I exercised when eyeballing the monk, I stare at the military man.

I take in his uniform, his bag and his beret and estimate his age to be about 24.

Channeling my meek and utterly bumbling inner photojournalist, I take a few surreptitious photographs on my phone and feel frightened as I wonder whether my cunningly timed coughing fits will disguise the moronic crunching sound of my Samsung Galaxy’s camera.

The military man doesn’t notice or if he does, he keeps the fact that it’s Amateur Hour to himself.

Languidly, he uses the time to stretch out and fall asleep and, while he does, I gaze at him wondering where he is going and whether he has a gun before deciding we can’t be in any real danger if the military is snoring away on a sea train.

Soon the monk returns and I am finally convinced that this isn’t a Clark Kent and Superman situation. The monk is there and the military man is in his chair but he simply leaves a seat between them and settles down for the ride.

As if sensing his presence, the military man dashes the little sleep he has had out of his eyes, catches sight of the monk and cracks a smile that erodes the severity of his uniform.

After a short serene silence, they quietly strike up a conversation as the monk gazes past the soldier, out over the water and rubs his bare feet together while the military man answers his questions with his head bowed in deference.

There are quiet smiles and there is soft laughter and I finally understand why I can’t shake the feeling that they are the same person.

Because even though one connotes the threat of civil war and the other is a symbol of non-violence, they both want the same thing for Thailand.

One through meditation and the other through a bloodless restructuring of the government that has seen the junta arresting anti-Thai coup protesters who have voiced their dissent by eating sandwiches, throwing up their hands in ‘The Hunger Games’ District 12 salute, wearing red or publically reading ‘1984’ with enough time to head home before pumpkin hour during the curfew days.

I’m grinning about this foolishly and digging in my bag for lozenges when I realize that the monk is gesturing towards me and pointing to the seat next to him excitedly.

Without a word he points at the brown leather bag I’ve been rummaging through and I realize that he has seen something of interest in my pile of Kleenex, laptop, literature and taffy and I hold up each item as he shakes his head, evidently amused.

Finally, I pull out Falkor.

A golden rope dragon my friend Zach found in his room and gave to me as a peace offering after he lost my shoes in Pai in 2012. I named him after the luck dragon in ‘The NeverEnding Story’ and I’ve taken him on every journey since including this ferry ride where he looks like he is fast becoming a highlight of the monk’s entire life. 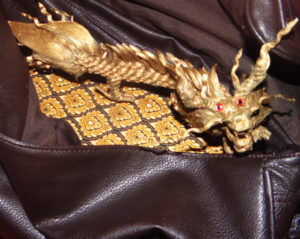 I wave Falkor at the monk, he nods and the military man grins at something the monk says in Thai which I imagine is something along the lines of “Yes, you idiot, bring me the dragon.”

Incredibly and in a way that makes me feel guilty for taking clandestine pictures of them both, the monk gestures to the seat next to him.

More than a little embarrassed,  I walk over, sit down and the monk immediately moves away as though I smell like bright yellow durian left stinking in the heat to knock people out. Stealthily smelling myself and finding myself to reek far fresher than curdling fruit, I move forward again, offering him the dragon and he moves back even further.

Still friendly in the eyes but firm.

Baffled, I sit there stupidly trying to make sense of his words spoken in Thai until the military man walks over and I imagine I’ve offended them both in a way  that will cut to me ending my days picking weevils out of my rice in Klong Prem Central Prison.

Instead of brandishing handcuffs, the military man holds out his hands, smiles gently and gestures towards Falkor.  He then hands the rope dragon to the monk who is still pulling his body away from me and that’s when I hear my sister Melissa calling to me from our seats and  hissing at me to come away.

My sister who has spent a month in a monastery and knows that you cannot sit that close to a monk and neither can he receive an item directly from a woman hence his breaking his back  to get away from me and his refusal to take the rope dragon from my hands.

A few minutes after I have scurried back to my seat, mortified and feeling fresh off the boat, the military man walks over, hands Falkor back to me and smiles.

In his military fatigues and his big black boots with his black beret he smiles just  like he would in jeans and a T-shirt. And for the first time since I arrived in Thailand, I feel unafraid as he nods his head, thanks me , laughs a little and walks back to his seat next to the monk.

When it’s less obvious that we are still talking about the encounter, my sister Melissa of the Monastery and Zen in Surround Sound leans over and tells me that if my luck dragon wasn’t lucky before, it is now because we have both been blessed.

One a golden rope dragon, the other a wide-eyed world traveler who has no idea how she will survive the vow of silence she is determined to make when she visits a monastery for a few days in Chiang Mai.

If she’s fortunate, there’ll be a monk.  One much like the one on the ferry. One who will help her, guide her and take her firmly under his wing.

Because she comes with the luck of dragons.