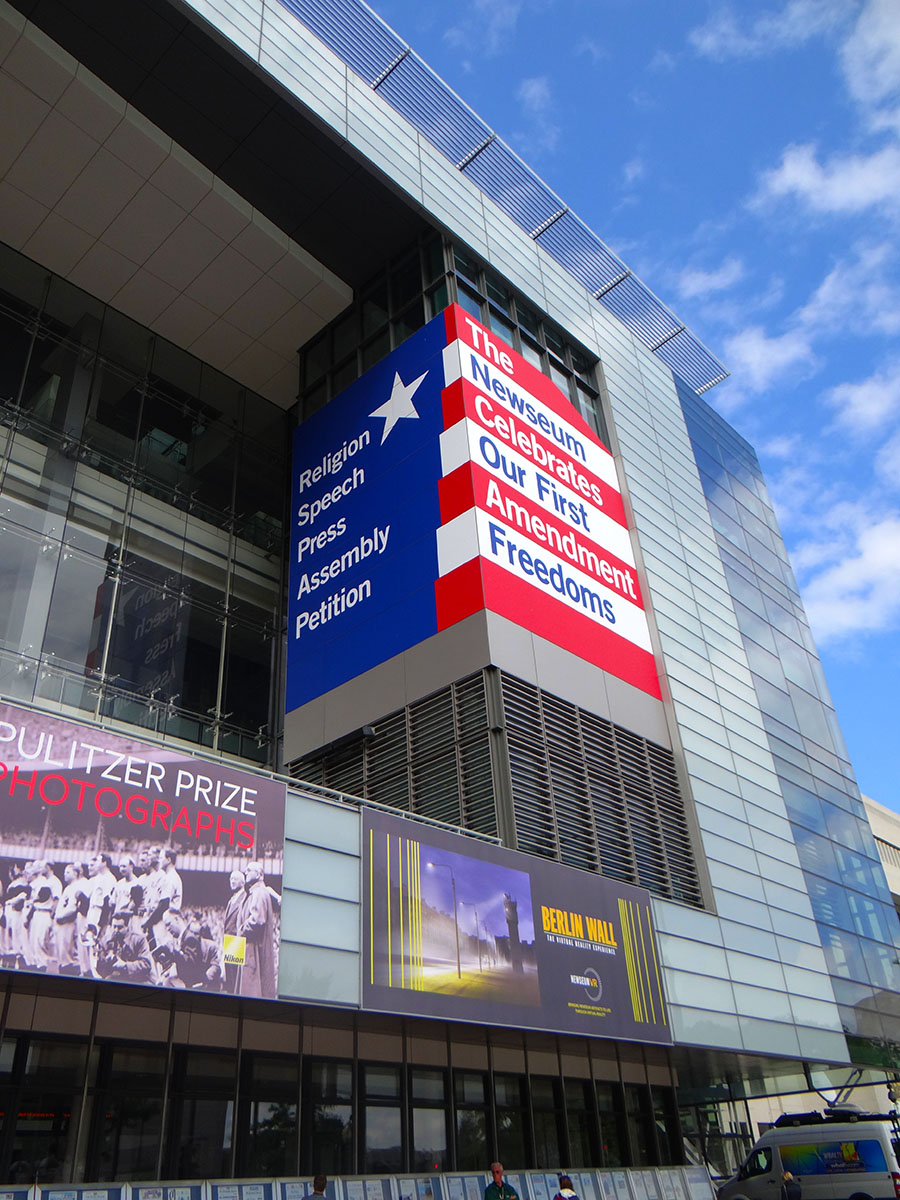 At a museum across the Atlantic Ocean, Blair Forlaw, a volunteer tour guide, stops in front of an exhibition of the day’s front pages.

She leads a small company of journalists speaking at a conference in Washington DC through the sprawling Newseum and pauses to see if any of her group’s respective papers have been featured.

There is no news from Nigeria. None from Uganda but above a paper from Nepal, The Namibian shines familiar and the journalist from Windhoek let’s out a shriek of excitement before Forlaw begins to read a few excerpts.

“A young boy digs through some waste in the Okurayangava residential area in Windhoek yesterday. The boy looks for anything he can use as a toy. Photo by Garwin Beukes.” Then “Mother dumps baby after fight with boyfriend.”

The news isn’t good but seeing the day’s paper in this glittering celebration of media does its bit to dull the despair.

The news is more of the crushing same repeated sporadically in headlines throughout the year as Namibia grapples with its issues of poverty and baby dumping amidst its particular brand of social ill but it is something to feel part of such a rich fraternity. The brotherhood of media that spans the world. Informing, educating, uncovering, bearing witness and ideally challenging oppressive governments, patriarchy and the status quo.

Situated on the historic Pennsylvania Avenue in America’s capital, the Newseum is a dynamic and interactive museum of news. 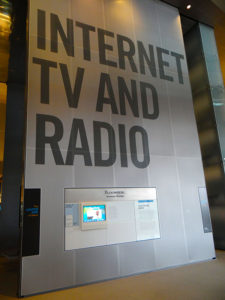 Comprising of six levels each with its own focus and attraction – a piece of the Berlin Wall, a CONUS Truck (the world’s first satellite newsgathering vehicle), a broadcasting antennae salvaged from the ruins of the World Trade Centre –  the Newseum stands tall with 45 words of the First Amendment of the US Constitution carved into a 75-foot marble tablet overlooking ‘America’s Main Street’.  The site of numerous marches, protests and parades ranging from celebrations of emancipation to the dark day in 1925 when 30 000 members of the KKK marched in favour of white supremacy. A ghostly forecast of the news recently radiating from Charlottesville.

With tickets valid for two consecutive days in which you will only just scratch the surface of its in-depth exhibitions building on the idea that “there’s more to the story,” the Newseum is a news enthusiast’s dream. 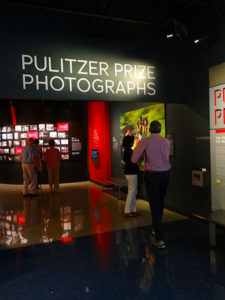 Featuring the only complete collection of Pulitzer Prize winning photographs with insights and documentary expounding on when, how and why the photograph was taken as well as a news history gallery recounting major events over 500 years in the spheres of war reporting, women in media and the speed and changing face of news, the museum is informative, interactive, detailed and exceptionally curated.

A rabbit hole of all things news in a way that encourages patrons to better understand the role of media in society while allowing them to goof around in faux newsrooms or help destroy the Berlin Wall in virtual reality, the space is also a site of inspiration and homage for those in the field. 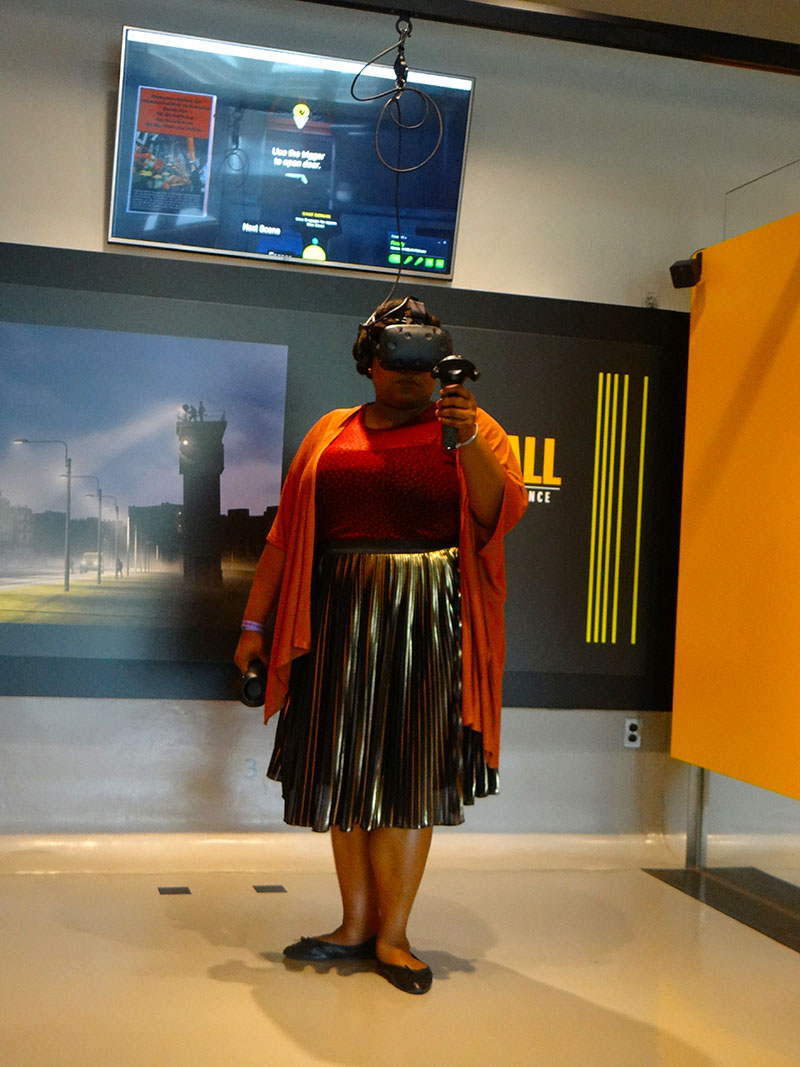 Somber and disquieting, on level 3, the Newseum’s Journalists Memorial honours 2 300 reporters, photographers, editors and broadcasters who died in the line of duty with the recently murdered Somalian radio journalist Sagal Salad Osman, gunned down in Mogadishu, catching the eye in her bright red hijab.

The photographic memorial is updated each year and the touring journalists speculate that next year it may include award-winning reporter Kim Wall. A Swedish freelance journalist killed at sea pursuing a story about Danish inventor Peter Madsen just last month.

Denmark ranks high on the World Press Freedom Index while Somalia is one of the most dangerous countries in the world for journalists. Rankings can be checked at computer kiosks within the Newseum where the Namibia-based journalist researches her home country. 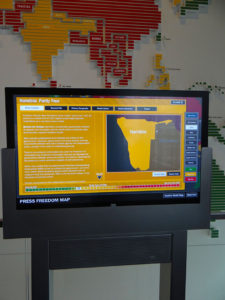 According to Reporters without Borders’ 2017 World Press Freedom Index, Namibia ranks number 24 in the world and it is number 1 in Africa.

At the Newseum which uses Freedom House’s ranking of 32, the country is coloured yellow which indicates a media landscape that is “partly-free” amidst a few particulars.

Population: 2.12 million, literacy: 85%, life expectancy: 51.95 years and two paragraphs about Hannes Smith, co-founder and editor of the Windhoek Observer, and The Namibian’s Gwen Lister.  The latter celebrated as Namibia’s most prominent journalist and awarded with the Courage in Journalism Award from the U.S. based International Women’s Media Foundation in 2004.

Visually stunning, illuminating and inspiring in its curation of some of the world media’s triumphs and tragedies, the Newseum is a Washington DC must for those eager to learn something new about the news. 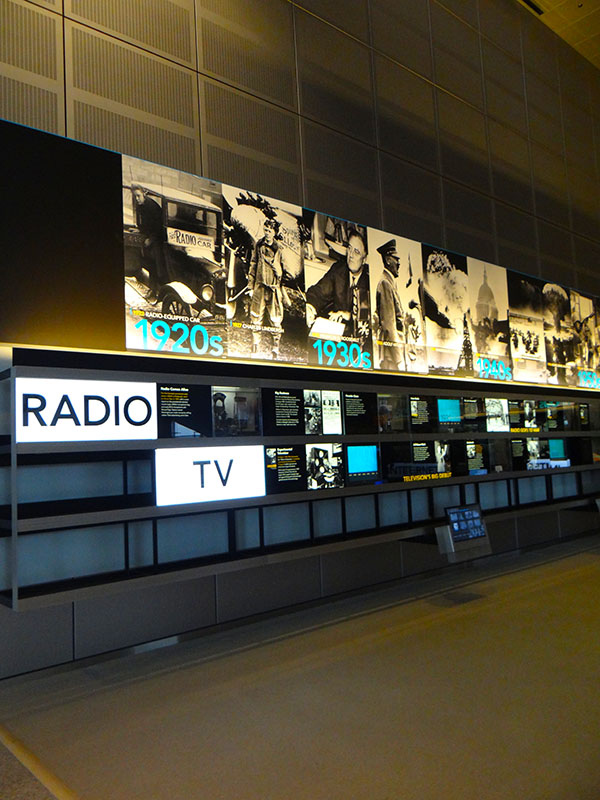