She stares out at me from eyes so squinted and undulating with age they seem to be entirely iris, watching mutely with the vigilance of a sentry as I angle my camera towards the tree above her head and pretend to be taking a picture of the canopy.

At 98 years old, one of the oldest members of Lombok’s Sasak tribe has been privy to all manner of voyeuristic tricks so she peers at the contingent of journalists slowly making their way through Sade with the gravity of a century-old presence housed in a bent back, wrinkled face and mottled hands.

Her fingers are the only thing about her that move. They twirl one of the many woven bracelets laid out for sale in front of her and the over-and-over motion is like a clock counting time.

Back to the village that has changed a little but largely stayed the same.

Like the Sasak tribe’s women before her, the old woman is a weaver.

As a young girl, she learnt the trade from her mother who would weave on the front porch of a traditional house made of natural materials. Woven bamboo for the walls, thatched roofs made of mountain grass and clay floors cured with cow or buffalo dung to ward off mosquitoes.

The rice barn meant to feed Sade’s 700 inhabitants is made of the same material. 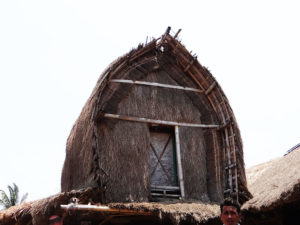 It stands near the centre of the village on round stilts topped with poison to kill any acrobatic mice. Even though there aren’t any.

Because mice come for the rice and there isn’t any of that either.

A drought has hit the island hard. It’s visible in the barren, desiccated fields gaping up at the scorching sky on the way to village and in the inert men who sit and smoke restlessly in their quarters.

Come night fall, the men will do what they have done for generations.

While the women sleep in the house, they will watch from a little room outside and guard their female relatives from kidnapping.

A Sasak marriage tradition in which a suitor kidnaps the bride-to-be and takes her to a relative’s house where she will await her fate.

After she is safely stowed away, the man’s relatives will let the bride-to-be’s family know that she has stayed away safely before they move towards getting a marriage permit from the head of the tribe.

The men stand guard in case someone undesirable tries to spirit the women away.

Because in Sade’s dusty, chicken run street, love blooms as beautifully as it does anywhere and the hope is that a Sasak women will be ‘kidnapped’ by someone she likes.

Even if he is her cousin. Since for 15 generations the Sasak of Sade have existed as one family. Marrying each other, living together and supporting each other while maintaining their Muslim values and their traditional way of life.

One of these traditions is gendang beleq (big drum). A musical performance centered around two drum players who dance and drum in a duet and which is traditionally performed during major life-cycle events such as birth, death, weddings and circumcision.

In Sade, the gendang beleq performance is performed in a quasi-town square accompanied by gamelan – traditional ensemble music played on metallophones, drums called kendhang, bamboo flutes, xylophones and the rebab.

This while Lombok bustles busily outside.

Tour buses come and go, people pop in to buy woven cloth or a can of Coke from a kiosk on the outskirts of the village and still more arrive to practice their English with foreigners.

Occasionally her eyes follow one of the sporadic tourists who have come to explore her home but she never calls out the way the other Sasak women selling woven goods do.

And she doesn’t smile like the old woman weaving around the corner does.
Wide, inviting, with a blood mouth full of betel juice.

Instead, as we close in, pulled by the strange gravity of such simple survival, she waves us away.

A brisk, agile movement that narrows her eyes to slits and transforms us all into a cacophony of apology and shame.

Her life may be on show, the modern world may roar noisily beyond the cluster of traditional houses, some Sasak men and boys may perform in the square to eager applause and she may even silently sell her trinkets to the assorted curious but in that sharp, sure movement, we realise that she is not for sale. 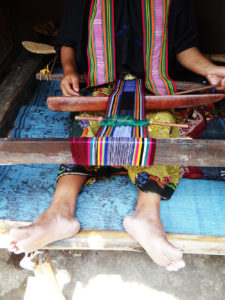