Fine Art gallery is closed on Mondays. I know this because after looking for the place for the better part of an hour, I’ve done an about-face in front of its tightly shut doors and I am striding down Sam Nujoma Avenue in Swakopmund wondering what in the name of Nescafe I’m going to do with the rest of my afternoon. 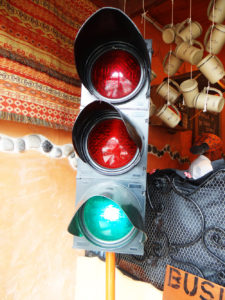 Caffeine fiend and damsel in dire straits that I am, I decide to regroup over a cup of coffee and, precisely as the idea begins topercolate, the Village Café magically appears on my left nifty as the Knight Bus and dangling take-away coffee cups like they’re the most elegant ornamentation.

Though I’ve barely placed a foot inside the establishment, my bad mood is broken by a sign that says “In 1832 on this spot…nothing happened.”  As it’s absurd, insane and entirely to my liking,  I  laugh out loud and ask a doek wearing waitress whether they have Wi-Fi. And her cheery “Of course” seems to mark the beginning of a beautiful friendship.

As my additional request for a plug point usually prompts a swift sizing up as an urban urchin who is going to order the cheapest thing on the menu and siphon internet and electricity while sitting there through an extended winter, 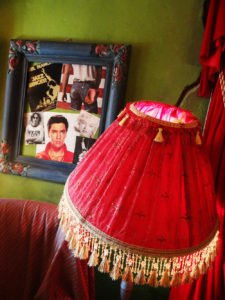 I arch my eyebrow combatively and anticipate the chill.

However, like a merry marm who knows my plight of holding tight to a Hewlett Packard that has long since given up on battery life, the young waitress happily leads me to  what I think is the best  table in the house before handing me an extension cable and inquiring as to whether I would like anything to drink.I do. However, I am struggling to get the words out because I have walked into a room so singular and so filled with curiosities that my dehydration seems to pale in its mundanity. 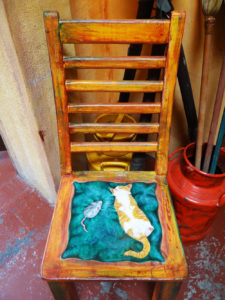 Though Martha Stewart would break out in hives at the scene, the Village Café’s saloon has elevated mismatching to high art.

Fringed red lamps clash with yellow and green walls, a lamp post beams next to a draped stage and through a wall of empty windows I can just about see a mannequin under an umbrella peering into a room which is home to a stuffed white cat and a pair of  bright orange barber chairs. 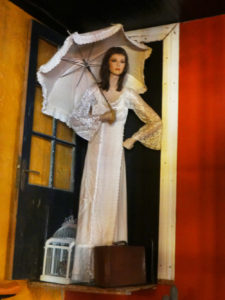 As if this isn’t enough to goad my gawking, the patrons are just as peculiar.

A group of young tourists merrily mangle the English language in one corner, what looks like a madam and her domestic helper squabble about the virtues of Mrs. Balls under African batiks in the courtyard and just as I sit down in the saloon a woman and her elderly mother walk in starring daggers at me perched in their favourite spot.

Thoroughly content in the kitschness, my messing with their mid-morning mochas is barely a blip on my radar. And after I order a cappuccino replete with bacon and  spinach quiche, I  stride right by them as I take in painted cats curled up on rustic chairs, bicycles with chickens in baskets on the wall, a random red kombi,  a bright blue type writer as well as the broken china on the toilet wall which is exactly the same set as my mother’s….though without her inevitable screams of horror at the sight. 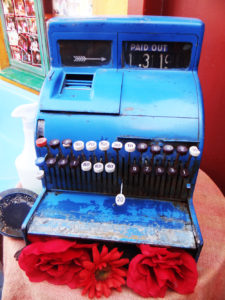 Much like everything else my meal is perfect. The coffee is creamy, the quiche boasts its bacon and the sneaky chocolate cupcake I have for dessert is a seminar in scrumptiousness.

The afternoon disappears in a daze and their 17h00 closing time seems a tad too soon and is doubly depressing in the fact that their switch point isn’t working. Expecting blank, bitchy stares and directions to the nearest ATM, I am amazed to hear them say I can settle my bill the next day. 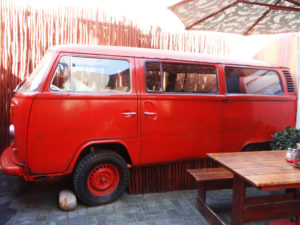 For some reason  that kind of good faith leaves a little lump in my throat and as I step out into the eager East wind, I can’t help looking back in disbelief  thinking this magical, meandering and mismatched place may very well be the coolest thing…since coffee.