Our chaperone is a darling but she struggles to say ‘w’.

Instead, as she leads the way to famous dancing kudus and shamanic lion men, she shines her neon green laser pointer on rock engravings of long necked mammals and great horned beasts speaking of elegant “giwaffes” and grumbling “whinos”. 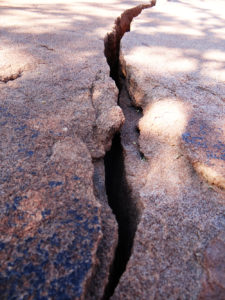 Our wonderful tour guide’s mispronunciation is as adorable as the petroglyph penguin we find etched into the sandstone. A rudimentary bird who joins over 2500 pieces of rock art spread across 212 stone slabs engraved by Stone Age hunter-gatherers a cool 6000 years ago who later gave way to the sometimes bloody stylings of the San in the Kunene Region of North Western Namibia.

They call the site Twyfelfontein for the doubts a farmer who lived there had about the spring. 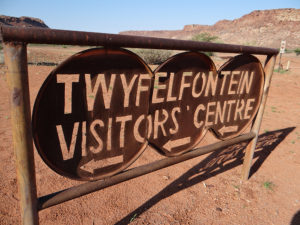 Translated from Afrikaans to English as the “uncertain” “doubtful” or questionable” fountain, Twyfelfontein is a national monument, a UNESCO World Heritage Site and one of Africa’s most prodigious and ancient art galleries.

With rocks covered in desert varnish, a hard grey patina below which a chisel can fashion engravings through the exposure of the lighter underlying rock, Twyfelfontein’s red rocks and tumbled boulders are ancient canvases the most celebrated of which feature a dancing kudu, a large giraffe and a lion man. 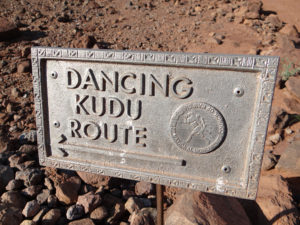 The latter with its human feet and hand at the end of its tail is perhaps the most memorable.

Said to depict a shaman who transformed into a lion, the engraving tells a shorthand story in much the same way as the rhino or giraffe which Desiree, our Twyfelfontein Visitors Centre tour guide, says are engraved to summon the rain while a circle is symbol for water. 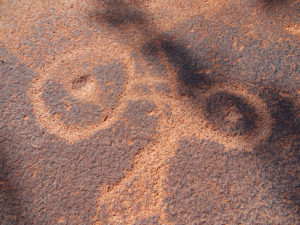 As for the penguin engraved so far from the sea? A record of what the San had seen when travelling to the ocean to collect salt to preserve their meat. Also intriguing is the four-legged ostrich whose extra limbs are engraved to suggest movement.  “The first motion picture!”

That’s our tour guide after teasing a chasing lizard half to dementia by shining her laser pointer on a stone. Her favourite engraving is the majestic Lion Man and most of the journalists present agree. 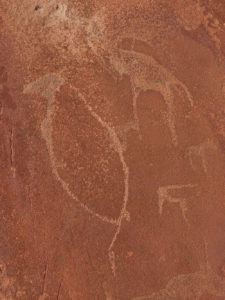 Twyfelfontein was a holy place for the San.

A place of spirits where they asked for rain, successful hunting and to heal the sick.

It still has an air of the mystical now. It’s quartz stone etchings making a communal memoir of the sandstone as shadows rise and fall over the rock, sometimes hiding, other times concealing the ancient art in the al fresco gallery.

My favourite engraving is of two giraffes. White and tucked away in a somewhat cave where the artist stayed cool and relatively hidden from predators, a sucker for comfort and dodging death just like me. 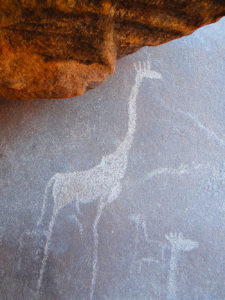 When all has been hiked, “Ooooh!”-ed at and photographed, our tour guide grins at our snapshots depicting one of the most precious places in the world and suggests a way to augment our income…

“Now you can make postcards!”

Damaraland - A Place of Preservation